I mentioned Saturday that Anna Mercury by Warren Ellis is a comic book that’s frustrating because I want more of it. Upon reflection, I decided there’s really more to say about it, so here we are. It’s one volume that’s mostly setup for a larger series that never appeared, so I can’t recommend it for sheer pleasure reading or longterm investment, but it is at least a whole story, so you won’t be too upset if you do decide to read it. There are some interesting concepts going on and some beautiful pinup covers, so you might well decide to do that.

None of the summaries really describe the book well, but here you go: 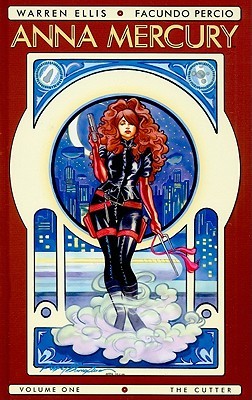 A high-kicking, gun-blazing, sexy secret agent has one hour to save the city of New Ataraxia from an unseen menace from another reality. Dancing amid the spires of a city called New Ataraxia, there is a woman who can cloud men’s minds, leap across buildings as if weightless, unerringly fire twin automatic pistols in the most insane conditions, and disappear in a crowded room. She fights against the political repression of an insane technocratic society, comes from a place that no one in New Ataraxia has ever heard of… and has only one hour to save the city from itself! A high-octane blend of The Shadow, Tomb Raider, retro-punk science fiction, and 21st century Weird Pulp Action, Warren Ellis’ ANNA MERCURY is a headlong adventure serial about a beautiful and mysterious spy-adventurer who is not what she seems.

Avatar originally published Anna Mercury in 2008, about ten years after Stormwatch and The Authority, but it reminded me a lot of that. (Some reviewers have called it “Warren Ellis on autopilot,” but I’m not sure that’s relevant for my purposes. I love The Authority, and I’m interested in this different take on the Carrier or whatever Stormwatch’s base was called, Wikipedia wouldn’t tell me immediately and I gave up looking. Anna works for an apparently-British government agency that oversees nine alternate Earths, surrounding ours but in different dimensions. (Her boss makes reference to “imaginary worlds” at one point, so for a few minutes I expected something Unwritten-esque, but he turns out to just mean parallel dimensions.)

The agency can send agents like Anna to the other Earths, but only for a limited time. The energy it takes to do that can also be used to give her some limited powers, like mind-control and acrobatics, but the more energy she uses for those things, the less she has left to get back and the more dangerous it is, which adds an interesting ticking-clock to the usual hijinx but also makes her “powers” more of a tool, so she feels more like a secret agent than a superhero. That has implications for her as a character, too, when she has those powers in the alternate worlds but not at home.

The Earths have some degree of parallel development. We only see one in this story, but it has a very Classic-Doctor Who “Genesis of the Daleks” kind of vibe to me. In 1943, American battleship randomly appeared on the street in a city called New Ataraxia. They’ve built their religion and culture around that revelation. The city across the bridge, Sheol, didn’t see anything and doesn’t believe, and it’s escalated until New Ataraxia is willing to just exterminate Sheol. Anna is trying to stop that from happening, because the agency feels a degree of responsibility for the situation. Other than that, we don’t get much information about why the ship appeared or what happened, and we know nothing about the other Earths. So, there’s potentially a very interesting set of interconnections between a group of similar worlds… although we don’t get to see what they might be or how closely the Earths are related.

The final thing we need to talk about here is whether or not this is pure exploitation. The cover I have, and the one I put up there at the top, has a more retro-scifi feel, but other covers (by Juan Jose Ryp or Felipe Massafera) and a lot of the interior art pieces (by Facundo Percio) are more sexual. The whole vibe of the character is a pulpy James Bond/Lara Croft mix but in the Matrix. Reviewers actually refer to Anna as a “dominatrix,” which I assume is just coming from her clothes, there’s no reference to that in the book. Honestly, sexualized exploitation art isn’t really Ellis’s thing in any of the books I’ve read from him. Anna Mercury has the art style, but it doesn’t really have the objectification or sexualization, there’s no sexual tension with anyone in the story and while I thought her poses were sometimes over the top, it’s just not the same as other books I’ve read where the women were just there to pose. (Remember that New52 Starfire that was so awful? I remember.) So, I don’t mind saying how beautiful I find the art to be, especially the variant(?) covers at the end, and I believe this could’ve been headed toward a statement or exploration of the trope. Her hair is a wig, but I don’t understand the explanation:

Does she mean that she wants to look unbelievable on the other Earth? Or that she doesn’t think she looks impressive/believable enough as herself? I mean, I’d be scared of her arms no matter what her hair looked like. So I’m just not sure what that statement was supposed to mean.

There were a few more single issues released after the arc reprinted here, and I may actually track them down to read them. I’d really like to know more.

Anna Mercury On Goodreads | On Amazon