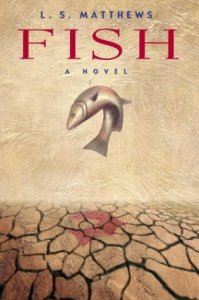 I love fish. I love books about fish. So, I searched the word “fish” in my library’s ebook system, and I found Fish by L.S. Matthews: a remarkable little children’s book about a refugee family. Their child, Tiger, saves a fish from a drying-up puddle and takes across the border with them on the hope that they’ll find water and a safe place for the fish. It’s a very simple plot — walking for a while — but the fish gives it that extra twist, something to be curious about.

So, we’ve got two interesting things to start with: Refugees, who are an uncommon topic in American fiction, and a fish. One more different thing about this book is the author’s use of nonspecific language. She never says what country the family is from originally as aid workers, or what country they’re fleeing from or going to, or the year. She also never gives Tiger’s gender, age, or real name, and several other characters go unnamed as well. (All this holds up in the excellent audiobook read by Jenna Lamia, she creates a voice that sounds like a young child, and gives several characters light accents, but you can’t identify too many details beyond that). You hardly even notice, though. It makes the book seem much more immediate from Tiger’s point of view, and it makes the events seem tragically timeless. So many countries are dying from lack of water, and torn apart by squabbling wars, that this could be anywhere.

In this context, the fish is clearly representing hope. It seems to change shape and color, sometimes big and beautiful, other times tiny enough to fit down a water bottle, and yet because we’re hearing the story from Tiger, we’re never quite sure if the fish has changed or if it’s just a trick of the light. The fish is unexpected, unlikely, completely unreasonable to hold onto, and sometimes you forget it’s there, but keeping the fish safe becomes an imperative. Otherwise it would feel like the whole journey had been almost pointless, even if they made it to the end, because they struggled so long and hard to keep the fish alive. If I have one complaint, it’s that a final scene makes this fish = hope symbol too overt, but it’s probably fine for this age level.

Fish was Matthews’ debut novel in 2003, although she’s written a good handful since, so her control over the work is impressive. The writing is great, the nonspecific choices are perfect, and it has a tone resembling that of many children’s historical books, the kinds about Nazis and the Depression. So, it’s gripping and sad and slightly horrifying, but it shouldn’t be too much for most kids and it addresses a still-timely issue that we don’t see much in American children’s literature. Highly recommended.