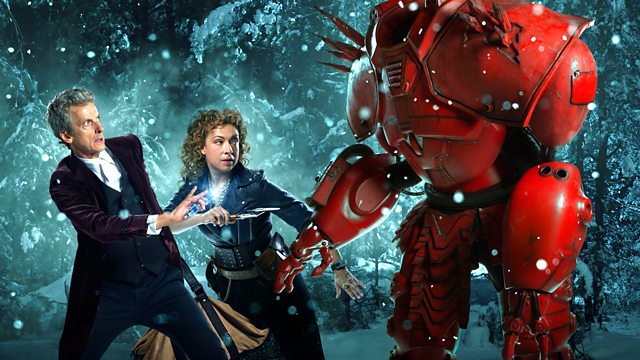 This was an Eleven-style episode, all “zany antics.” I’d kind of hoped River Song would be different, in a Twelve-style episode. Still, it was nice to have a bit of levity for the Christmas special, particularly after the sadness of the three-part season finale. I don’t have much else to say about the plot etc., except that on a ship of that size and funding, they ought to be able to detect a full-on meteor shower with more than a five-second warning. And why was River looking for the Doctor in the town? That was totally dropped.

I remain conflicted about River Song as a character and narrative device. Sometimes I love her, sometimes she’s just irritating, and she was both here. It’s a personal pet peeve when characters treat everyone and everything like their personal entertainment. However, I’m glad we got to see a bit of her life outside the Doctor, and start to distance her from the “crazy stalker” role she’d been nudged into. I don’t think it’s a coincidence that by giving her a life outside of him, this episode achieved two achingly romantic sequences and a passel of hilarious archaeologist jokes. And of course, I appreciate FINALLY getting some onscreen confirmation that she’s bisexual, because Moffat said she was years ago and then never put it onscreen at all.

At the same time, in practice, I find River Song to be a heteronormative and cissexist character. See: “Are you thinking? Stop it, you’re a man, it looks weird.” And while she MENTIONS being married to a woman, twice in the episode, the title is still “The Husbands of River Song.” Two mentions of women, three ONSCREEN husbands, when there’s literally no reason one or two of them couldn’t have been women. To me, especially in this episode, she reeks of “girl power written by a man.” Emphasizing female power by putting men down, acting like women have some magical mysterious powers, and generally being both rude and condescending, WHILE spending most of her time obsessed with stereotypically female pursuits like men and diamonds.

Still. I’ve loved her in other episodes, and I frequently loved her in this one. It was fun, and romantic, and suitably Christmas-y without being so holiday-focused that rewatches would be torturous.

7 thoughts on “Doctor Who Review: The Husbands of River Song”