I mentioned in my last post that I wasn’t taught anything about evolution in school. I was homeschooled, and on the whole I’m very grateful for it. I was mostly self-directed, got a much deeper education than I could’ve expected at an Alabama public school, had much more control over my social life, and transitioned easily into college because I’d already been taking college-style biweekly classes for homeschoolers in high school. The two significant educational omissions were sex ed and evolution — and really, I don’t expect I would’ve gotten those in an Alabama public school either.

I’ve purposefully compensated for those gaps in my adult reading, so it occurred to me that it might be helpful for others if I passed on some of that work. For sex ed, check out my review of Come As You Are, and let me know if you want more posts on the topic. I am a historian of sexuality, after all. For evolution, you’re in the right place. It’s a bit long, so I included headings.

My “course,” if you will, began with the Ken Ham vs. Bill Nye debate in 2014. I don’t know how much it penetrated into the mainstream discourse, but the prominence of the parties involved made it a big deal at least in some circles. Ken Ham is the guy behind Answers in Genesis, and the Creation Museum, and a whole bunch of kids’ books about dinosaurs and creationism that Christian homeschoolers absolutely adored back in the 90s. You can watch the whole thing on Youtube, or read a transcript here. (Disclaimer: It’s on a Creationist site and I haven’t checked the transcript for accuracy.)

I really can’t overstate how anxious I got about this. I wasn’t a Christian anymore, let alone a Creationist, but I’d never quite shaken the sense (based entirely on caricatures) that evolutionists were dumb and also kind of scary, and I was afraid of getting sucked in. But I loved Bill Nye too, probably more than Ken Ham. We watched him for science class when I was a kid, although we were taught to talk over or fast-forward any parts with evolution. I watched the debate, the whole two and a half hours of it, hoping it would give me some clarity, and it did. It was the first time I realized that science makes sense, if you actually hear an argument from start to finish. That evolutionists — scientists — weren’t making the arguments Creationists claimed they were, and that you could be an evolutionist without being an idiot. The opposite, in fact. I wanted to know more, so as I always do, I started to read.

First, Evolution For Dummies by Greg Krukonis and Tracy Barr. The For Dummies books are generally a bit cheap and tend to have errors, but this was a fine place to start for absolute basic knowledge. When a whole field is new, you need to establish some foundational concepts and terminology, and this worked well for me.

The first thing I did after the debate was see if Bill had any books for adults, and at the time he didn’t, but Undeniable: Evolution and the Science of Creation came out shortly thereafter. (Yes, it should be called “Unde-NYE-able,” but I guess it’s time to move past our disappointments.) On the one hand, I wish it wasn’t so tied to that debate because I think that’ll limit the longevity of the book, but on the other hand that’s exactly what I wanted… Either way, it recaps his arguments in greater depth and just generally goes into more detail with more examples and explanations, with space to go start-to-finish instead of being constrained by debate time limits.  It’s also entirely welcoming toward its audience — some other books can be a little too snarky and offputting. I’m told there were factual problems with some chapters, which may be unavoidable in a book that’s trying to simplify so much, but there was a revised version in 2015, and the issues were with some of the more sophisticated information that I wasn’t able to follow yet anyway. Still a great source for basic, but thorough, explanation. You could definitely start here if you don’t want to bother with the For Dummies book. 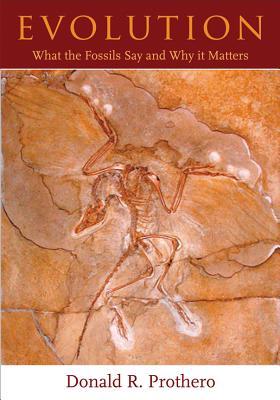 Why Evolution Is True by Jerry A. Coyne is a good choice for ex-Creationists as well as just those who want to fill in gaps in their knowledge. It’s specifically evidence-based and targeted toward those who don’t understand, who have misconceptions or who have heard misinformation. So, it’s quite thorough, covering the major elements of the theory and the best evidence supporting those elements. It’s also really great because it answers questions as they arise, and describes how the theory has developed in response to research over time. According to Goodreads I actually read this before Undeniable, but it’s a good step to come after those and answer questions you may have based on the basic reading.

Evolution: What the Fossils Say and Why It Matters by Donald R. Prothero comes next in my lineup. It’s good for a thorough skim or a deep reading, because it’s dense and informative but written in a conversational, clear style. Also, a lot more of the book is devoted to debunking/explaining away Creationist misconceptions. So, you might read this instead of Why Evolution is True and Undeniable and get some of the same information, if you don’t feel like you’re starting at zero. I would’ve liked it if that angle was better represented in the descriptions and marketing for the book, but still, I was at a point where I understood a lot of the basics and wanted something deeper without being impenetrable, and this was the perfect choice.

At this point, I felt like I had the basics — what an educated high schooler would know, and probably more than that, so I considered my project “finished” and started looking into topics and references that had interested me in the beginner books.

Your choices will be different, but these are mine — not so much a continuation of the educational program I set for myself, but the books I was able to understand based on that knowledge, and which furthered my understanding of it.

I hope this helps! I’m always happy to take questions on being homeschooled, ex-Christian, and so on, either here or via my email address listed on the About page. I have standing policies against being mean and/or proselytizing in the comments.

7 thoughts on “A Reader on Evolution”