January was the longest year of my life, but February only took what, a week? Bleh.

I’m finally feeling better after the great allergic reaction of December 2017. I’ve gotten furniture built in my apartment, so I had space to get out a lot of my books and plushies! It’s not everything yet, some of it’s still in storage, but it makes the place a lot homier when I can see my stuff out. The next project is to get nightstands and some rugs, since the place doesn’t have any carpet. My loud neighbors moved out this week too! 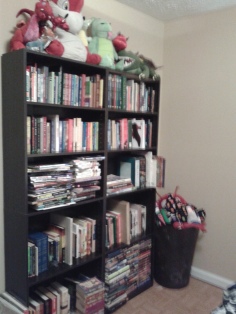 I finished The Gifted season one today, and the finale was pretty intense. The acting’s gotten a bit better over the course of the season, and the writing’s stayed good — the social issues fell into the backdrop for the middle of the season, to the advantage of quicker storytelling in my opinion, but they’re still present, and the last few episodes start opening up more to deal with the issues inherent in the X-Men — activism vs. violent revolution, Hellfire Club vs. X-Men, government vs. the oppressed, family member vs. family member. There will be a season two, presumably next fall, so, neat.

I’ve got Star Trek and a million superhero shows I’m behind on to watch now, but I’ve also started watching the terrible soap opera Famous in Love with a friend and it’s kind of great in the cheapest possible way. Another friend also told me about the one-season Jim Henson’s Creature Shop Challenge competition show from 2014 which is basically tailor-made for me, so I’m gonna watch that. Oh, and the new Queer Eye on Netflix. But all those are just one season right now! It’s fine!

I saw Black Panther and it was great. I’ve always appreciated how the Marvel movies dip into different genres to keep things fresh… Black Panther has some story beats that you expect in a first-movie-for-the-hero, but it’s not an origin story, and as for genre, it’s a kind of drama/James Bond fusion, with a lot of scifi? Hard to describe, but visually stunning and surprisingly quiet. Well worth the time. I also saw The Cloverfield Paradox and it was fine, pretty decent sci-fi horror although I’m finding it forgettable as time passes.

I’ve been getting better about fiction-writing, and it’s moving faster as I get used to it again. The project I chose is either a short story or the first third or a novella, I’m not sure yet, but either way I really want to get it done soon so I can get back to my novel projects. (The idea was just to do something shorter and finish it, to give me some experience and motivation now that I want to work on the novels again after grad school killed them.)

What are you up to?