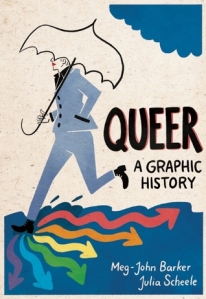 Queer: A Graphic History by Meg-John Barker and Julia Scheele, published in 2016. Right off the bat, I thought this book would be something different — a comic book of queer history. Rather, it is a history of queer theory, a much more academic thing, and it’s more a textbook-style introduction with comic-style illustrations rather than a graphic novel. But that’s no reason I shouldn’t read it, right? It frames itself as an invitation, a guide to help people understand what queer theory is and how it might help them or be relevant to them, even though the subject is academic and offputting. Turns out it works really well.

First, the book defines the word “queer” and how it will be used, in various ways, throughout the book. It clarifies several messy bits, including a distinction between queer theory (which resists using “queer” for identities and would claim everyone is queer) and queer activism (which uses “queer” as an umbrella identity word). I sorta knew that but hadn’t articulated it in my mind, so the book is already being helpful. Yay! Then a brief modern history of sexuality, in which I’m very impressed at how concisely they conveyed not only the history, but the current interpretation of why that history is significant. Usually in a sentence or two. That is skill.

The book then proceeds, in short sections, through similar explorations of modern gender history and queer theory in general, a history of destabilization, with significant attention to explaining Foucault and Butler, the monarchs of confusion (my words, not theirs). Then a discussion of normativity, specifically heteronormativity, and biology, or rather “biopsychosocial” systems. Then some criticisms and tensions — race and globalism, bisexual erasure, some feminisms, trans* activism, disability theory, and systematic class differences all complicate and challenge queer theory as it has been generally done and understood up to this point. The final section of the book explores recent developments in queer theory, and closes with some summarizing suggestions.

Throughout, the book is inclusive of bi, trans, ace, and other people and recognizes that G and L dominate the discussion and further marginalize others including disabled people and people of color. It’s honest about problems, and also just areas that are confusing and don’t make sense, even to theorists. It effectively communicates complex ideas and refers toward the thinkers who originally proposed them, as well as others who have made them more applicable and understandable, so there’s somewhere for you to go after this. I’m honestly really impressed with how well it did what it set out to do. It’s still not a quick browse, especially if it’s all new to you, but a few pages a day? Absolutely. I recommend it not only to those who are interested in exploring queer theory on their own, but also as a gift for serious allies and family members, or for a discussion group. No such book can ever be perfect, but this is the most accessible starting point I know of right now.

Also: I only had access to ebook versions and they were kind of terrible. I have every reason to believe a physical copy might be more visually pleasing.

On Goodreads | On Amazon