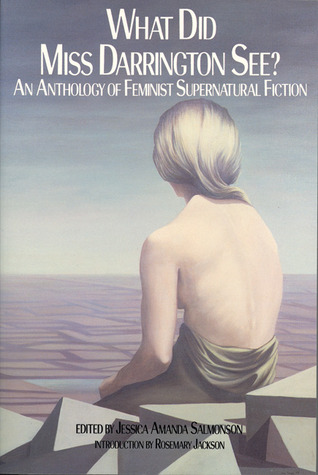 Winner of a 1989 Lambda Literary Award, this collection of twenty-four entertaining and haunting 19th-and 20th-century tales from the US, Britain, and Latin America reclaims a literary tradition that has long been overlooked. Using such techniques as magic realism, allegory, and surrealism, the authors re-imagine the cliches of supernatural fiction, focusing on female characters and treating traditional themes in inventive and provocative ways. Among the authors included are Elizabeth Stuart Phelps, Luisa Valenzuela, Leonora Carrington, Barbara Burford, and Joanna Russ.

What Did Miss Darrington See? An Anthology of Feminist Supernatural Fiction, edited by Jessica Amanda Salmonson, is an interesting collection. It seems to genuinely present a subgenre of magazine stories that hasn’t gotten much modern attention. It’s particularly compelling because they’re mostly ghost stories, but not really horror stories — they all use the supernatural in different, perhaps more emotionally- or thematically-evocative ways. A few of the stories are really brilliant, but I’m sure everyone would pick different titles for that honor.

So, are the stories actually feminist? Yes, in a quiet way. Most of them are something like “women’s fiction” perhaps, simply stories about women and women’s relationships, their concerns. That kind of thing is inherently feminist in many cases. The themes are also often about women’s agency or lack thereof, but it looks that’s usually secondary in story selection to the fact that the story is by and about women. That’s a perfectly acceptable way to approach the topic. I’m more bothered that the stories aren’t presented chronologically — sometimes two with similar themes are put together, but mostly it seems random. There’s also not much intersectionality beyond a few stories in translation and one or two referencing Boston marriages.

What really bothers me, though, is the introductory material. The introduction by Rosemary Jackson, and to a lesser extent the editor’s preface, imply that supernatural fiction is somehow inherently feminist because it’s irrational, and thus combats the rational patriarchy. Which, to me, is ridiculous and borderline offensive. No, full-on offensive. Women are not inherently less rational than men, and while the patriarchy is generally known for trying to extinguish male emotions and devalue women for having feelings, rationality itself is not the problem here and gender essentialism helps no one. Yeah, this book came out in 1989, and sometimes I give a pass for books because of the time in which they were written, but I found this super irritating and it called the story choices into question a little bit. We can talk about feminist supernatural deconstructions of the status quo without doing any of that.

One more complaint, which I can’t resist even though it isn’t about feminism: In the introduction to “Luella Miller,” Salmonson claims that “Regionalists invariably included supernatural stories as part of their output,” and then says literary historians tend to ignore the supernatural stories. I’m a historian, nothing is invariable. I nearly flung the book at the point alone. But I also question the whole assertion, if only on the example of Southern regional fiction. Southern gothic, anyone? Supernatural elements may be less important to other regional studies, I don’t know, but she should know better than to make an assertion that incredibly broad, and again, it made me question the story choices. After I noticed that, I realized how much New England seemed to be overrepresented in the story selections.

At any rate, these are good stories and I’m glad I read the book. There’s also a fair bit of biographical information for each author and a lot of further reading, so this could be a great window into a whole genre. I just thought I should warn everyone about the irritations at the same time that I recommended the book, because it would be easy to read this and think you’d read a survey of the genre, when actually you’ve gotten a small look into that genre through one editor’s lens.

CN: Some references to spousal and child abuse.