Hey lemme tell you about Mort(e) by Robert Repino! It’s one of those you pick up for the concept: 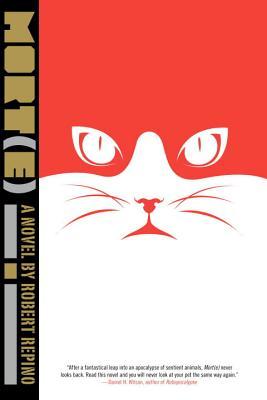 The “war with no name” has begun, with human extinction as its goal. The instigator of this war is the Colony, a race of intelligent ants who, for thousands of years, have been silently building an army that would forever eradicate the destructive, oppressive humans. Under the Colony’s watchful eye, this utopia will be free of the humans’ penchant for violence, exploitation and religious superstition. As a final step in the war effort, the Colony uses its strange technology to transform the surface animals into high-functioning two-legged beings who rise up to kill their masters.

Former housecat turned war hero, Mort(e) is famous for taking on the most dangerous missions and fighting the dreaded human bio-weapon EMSAH. But the true motivation behind his recklessness is his ongoing search for a pre-transformation friend—a dog named Sheba. When he receives a mysterious message from the dwindling human resistance claiming Sheba is alive, he begins a journey that will take him from the remaining human strongholds to the heart of the Colony, where he will discover the source of EMSAH and the ultimate fate of all of earth’s creatures.

This was a surprisingly quick and intense read at 350+ pages, but I’m still not sure what to say about it. There’s kind of an “MFA novel” quality to it, the symbolism sometimes too purposeful and things like that, but the book was good enough (and the “debut novel” issues minor enough) that I didn’t really care. It’s gruesome and disturbing, but not so grim that I couldn’t read it, and I am a weenie where these things are concerned. (CN: domestic abuse, puppy deaths, war scenes, and cannibalism). It’s also not just a gorefest, it’s not reveling in its violence — it’s a book about war, but it doesn’t expect you to enjoy those parts. It’s also about religion as delusion, which is where it’s sometimes a little obvious, but the themes are definitely not tacked on. You couldn’t have this book without them.

Those are important, but especially when related to the animal theme. It’s truly a book about what animals would be like if they could understand their own lives, and the most unsettling thing about the work is how like animals we all are. The cats and dogs and raccoons have different inherited mannerisms, but they’re not that different from our own instinctive behaviors, they just seem foreign because we’re used to seeing them in our pets. If Repino’s writing is slightly amateur in other areas, he makes up for it by the realism of these beings who are animal and sentient at the same time. Then you get so used to the animals that when humans reappear as characters, they seem strange and awkward and their assumed superiority over animals is grating at best. It’s not exactly an animal-rights book, that’s not the point, but it’s certainly an exploration of how we relate to each other.

I loved Mort(e) as a character, partly for that reason. (The reason for his name is a bit silly but I get the metaphor so I’ll let it slide.) A lot of reviewers say they don’t like him or don’t feel like he has a personality, which I understand because he comes across as unemotional most of the time, but I like that and I get that. He’s a character who just DGAF unless it’s about the few people he loves, and doesn’t waste his energy for anyone else. His devotion to Sheba may seem odd since they didn’t know each other as sentient beings, but he loves her the way animals love, and the we animal people love our pets. Unconditionally, just for existing. I would move heaven and earth for my cat, even though he doesn’t understand it and could never do the same. It’s not a bargain we’ve made as equals, it’s a promise I’ve made to take care of him, and that’s enough. Not that I’ve been able to look at him the same way since reading Mort(e)…

People have compared this to various different books in other reviews, the downfall of a concept-based work, but it reminded me most of Animal Farm. The main difference is Mort(e) is interested in the fact that these are animals than in creating a direct allegory. So, it’s more realistic in that sense, although it’s still exploring similar themes. It’s hard to compare to anything, though, because it fully embracing talking animals as dystopian science fiction rather than any kind of fantasy, charming or otherwise.

I knew before I’d even finished the book that I’d want to read the sequels. There are two so far, a novella and a direct sequel, and I’m strangely glad (for an uninvolved party) that Repino has been successful with the series, especially because I want to see how his writing develops and what else he has to say about these characters. I’ll let you know how it all turns out!