I’ve been a casual Star Wars fan forever. I happily admit that the original trilogy are some of the best movies ever made, but I found the sheer scope of the fandom and expanded universe much too daunting for me. Every so often I might try a novel here or there based on recommendations from friends, but I don’t think I ever even finished any of them. 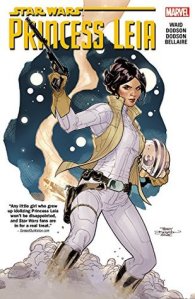 After Rogue One though — despite not liking the movie especially — I realized once again that I really am interested in more stories from the universe. I also came across the cover for the Princess Leia graphic novel by Mark Waid, and I really liked it, and I really like Mark Waid, and I like comics, so I gave it a try. It was just okay, but it’s part of a newish Disney canon series set in the midst of the original trilogy and an entirely manageable length, so for the past year I’ve been reading Star Wars comics and I’m here to direct you toward the good stuff!

The cornerstones of this whole thing are the aptly-named Star Wars series, which follows the main Leia-Luke-Han trio, and the Darth Vader series. They’ve both been running since 2015 and are on their fifth volumes (with one major change). I’ve read the first three volumes of each. Star Wars is relatively bland, I think they struggle to do any big reveals or character development when the plots are set between such well-known movies, but it’s worth reading to keep up with the riveting Darth Vader stuff. That’s intrigue, that’s Vader being awesome (but never too open with us), that’s charismatic original characters. The best thing about it, in fact, is Doctor Aphra. She’s a criminal space archaeologist who works with Vader for some reason. She’s rightfully popular and now has her own series taking over Darth Vader‘s space after volume 4.

Accompanying those two main series are several globs of one-volume stories based around specific characters. They’re set kind of wherever in the timeline, they don’t tie in with the ongoing series, so it doesn’t really matter if you read them in order which is really nice. They are: Princess Leia, Chewbacca, Lando, Han Solo, and C-3PO: The Phantom Limb (sorta).

Princess Leia and Chewbacca are fine but nothing special. Lando and Han Solo, those are special. The best of these comics have great original characters, and these are no exception. Lando is a pretty straightforward story, but with a stronger plot than the books coming before it, and with more grounded characterization. I’d love more stories about Lando like this, but I’d pay absolute buckets of money for a prequel about the twins.

Han Solo by Marjorie M. Liu is the absolute best, though. It’s about Han and Chewie entering a spaceship race as a cover for a secret job assigned by Princess Leia. It stays in keeping with the wider universe, the characterization and dialogue are spot on, the characters are moving within the arcs we’ve already seen, but it maintains suspense and intensity anyway because this is a completely different story that could go wrong (or bittersweet) in a hundred ways. The new characters are awesome and memorable, the art is wonderfully detailed, and the race/espionage plotlines are inseparably entwined so it’s tight all the way through. Love it, and you can absolutely read this one without reading any of the others.

C-3PO: The Phantom Limb is listed on Goodreads like a graphic novel in the series, but it’s actually just a one-shot comic. It’s set before The Force Awakens and explains how Threepio got his red arm. It doesn’t seem important enough to be that because I doubt they’ll mention this onscreen, but as a standalone short story exploring droids’ inner lives in the Star Wars universe, I actually quite liked it.

Along with that Threepio one-shot, there are a few bigger projects set before and after the original trilogy. Of all the choices, these have been the least impressive for me (which may say more about my dominant interest in the OT than their quality, but I do what I can. Also there are some Darth Maul books I haven’t been able to get my hands on, but they look neat.) Kanan: The Last Padawan is about a character from the Star Wars: Rebels show, which I haven’t seen yet either. I didn’t find it confusing, it’s about him as a child, but I think I would’ve been a lot more invested if I knew the guy. It wasn’t enough motivation to get the second of the two volumes. The Poe Dameron series is the only one set in the time period of The Force Awakens, and unfortunately volume 1 just wasn’t good. The dialogue is in fact actively bad. I like Poe though, the cover art is really good, and I enjoyed the supporting characters, so I’m down for volume 2 and hoping it gets better.

I know there’s a long history of Star Wars comics that aren’t in this canon, I just have no idea where to start with them. Any recommendations? I’m pretty sure the only other one I’ve read is Tag and Bink Were Here by Kevin Rubio, but that was pretty cute…