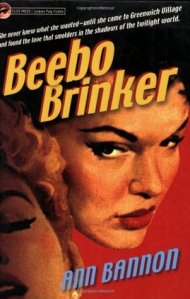 Designated the “Queen of Lesbian Pulp Fiction” for authoring five landmark novels beginning in 1957, Ann Bannon’s work defined lesbian fiction for the pre-Stonewall generation. Unlike many writers of the period, however, Bannon broke through the shame and isolation typically portrayed in lesbian pulps, offering instead women characters who embrace their sexuality against great odds. With Beebo Brinker, Bannon introduces the title character, a butch 17-year-old farm girl newly arrived in New York. Befriended by the gay Jack Mann, a father-figure with a weakness for runaways, Beebo sets out to find love. She never knew what she wanted—until she came to Greenwich Village and found the love that smolders in the shadows of the twilight world.

Was it what I expected?

Mostly, yes. I’ve been studying gay pulp for years, but because of the time constraints in a grad program, I couldn’t stray too far into lesbian pulp once I’d gotten the gist. This was the first full novel I had a chance to read. It’s all tell and no show and not much action, like most pulps, but the writing is surprisingly good. Occasionally overblown, but honest.

I liked being able to read it. I’ve read a lot of nonfiction about Greenwich Village, lesbian history, the ebb and flow of “butch” as a thing, but this is the first novel. Being written contemporaneously, it’s also more honest about its confusion than the history books usually are. Beebo doesn’t even know she’s a lesbian at the beginning of the book, so it’s an interesting view of a butch farm girl’s coming-out story. It uses some of the terms we historians take such care to define, but at the time they were more casual about it, and it emphasized to me how much of history is a reconstruction. Novels are the way to go for interiority.

Unfortunately there’s some major biphobia included in that — problematic constructions at first, building to an open “Be gay or be straight. Don’t be both. The only other girl I know who’s both is contemptible.” Typical for the time, pretty common now too, but it frustrates me. I almost always end up having the same reaction to lesbian classics, to be perfectly honest. They usually include bi women in some capacity, usually women who dump the main character eventually, but where are my bi classics?

Is it worth reading?

If you’re invested in lesbian history, then yes. I can imagine a lot of nostalgia value for the old days in New York, and even a lot of self-discovery value today, especially for butch women. There’s a lot to be said for that spark of recognition. Plus, for historical fiction fans, there’s an immediacy here and a setting you won’t find in many literary novels. I don’t like the biphobia, but I like to think most readers can differentiate between historical prejudices and currently-acceptable behavior. Ann Bannon was a big enough deal that you can find her work relatively easily compared to other pulps, so she’s a good place to start if you think you might be interested!

This book is part of my Classics Club list!