The time has come, friends, to show you some of what I’ve been doing these two long years in graduate school. I can’t show you my actual thesis yet, because there’s a possibility of academic publication, but I’ve been in a public history and museum studies program and that means I’ve also done a public project. Being me, I chose to create a queer literary history website. My subject is Carl Corley, a gay man from Mississippi and Louisiana who wrote several dozen gay pulp novels in the Sixties and Seventies under his own name, which was super rare at the time. He also drew (very NSFW) sci-fi comics, although those were never published. I’ve digitized all the books and quite a bit of his art, including comics, and it’s all up for free at http://www.carlcorley.com! 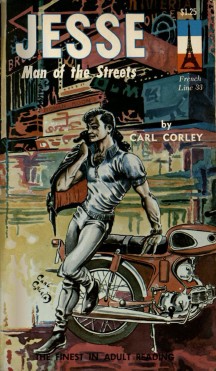 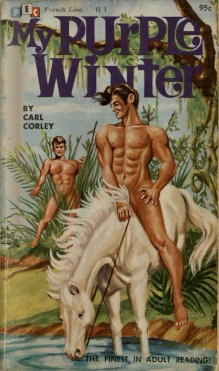 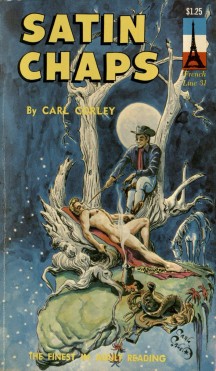 This project was born out of a desire to read Corley’s books, and not being able to do it because Sixties pulp is expensive and hard to find now. So, I hope you enjoy reading and browsing as much as I have. Gay and lesbian pulp novels have been considered trash for a long time, but they were actually some of the first places queer people cold see themselves, and queer authors took advantage of that. Some of Corley’s pre-Stonewall books are basically long rants about gay rights, barely veiled enough to get published! Plus, I mean, trash is kind of awesome. I’d love to have posters of his covers, but that’s neither here nor there.

My thesis narrates his life as best we can piece together from what he’s left behind, and also talks at some length about the content of his novels. They’re mostly set in the South or have Southern protagonists, and the early ones are very, very autobiographical. So, there’s a lot of interesting and important stuff in there about how queer Southerners saw (and see) themselves, about longstanding debates over terminology, and about how civil rights and gay liberation filtered into the rural South. He was also suuuuper problematic where race and gender are concerned, and the books provide an essentially unmediated look at those things too. (I’ve tried to include content notes where appropriate, but be warned that I haven’t gone through every book in detail and may have missed some).

So, this website is for you my lovely readers, who like weird old books and want to see some queer history you can’t get anywhere else, and it’s also for you my fellow historians and literary analysts. Corley fought in the Pacific in World War II, and he worked in local government as an artist, and he was probably an atheist but he was a little obsessed with Jesus. There’s so much here to dig into from any number of perspectives, and I’ve barely gotten started.

No website is ever finished, but the next thing I really should do is add some kind of historical FAQ. So, if it leaves you with any burning questions, please do let me know so I’ll know what to add. And as always, thank you for reading!

9 thoughts on “I Digitized Some Gay Pulp For You”