I don’t review much nonfiction on this blog. I like reading it, I often make a particular effort to include it in lists, and y’all seem to enjoy reading my term papers, but I haven’t done many reviews for some reason. I guess nonfiction books can seem more specialized, and even if I think a book is great or suitable for any interested parties, I don’t always feel qualified to comment on the content. This one, though — Secret Historian: The Life and Times of Samuel Steward, Professor, Tattoo Artist, and Sexual Renegade by Justin Spring — is right up my alley, and I think y’all will be interested too. 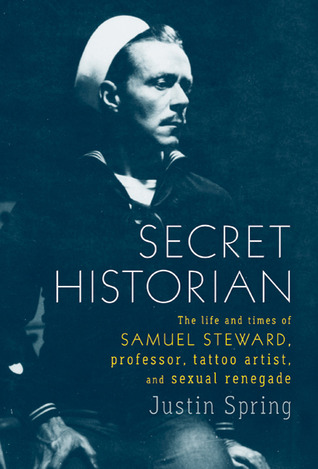 Secret Historian is the biography of Samuel Steward, a gay writer, academic, and tattoo artist who lived most of the 20th century. He had a number of pseudonyms and alter egos, one of which was Phil Andros, a gay pulp author of the Sixties. That’s my area of historical research, hence the relevance to me, but I hadn’t been aware of Steward because I only knew him by the name Phil Andros. Fortunately a blogging acquaintance (Jesse of Queer Modernisms) wrote an article about him and mentioned this biography. Steward wasn’t just Andros, but was also close friends with Gertrude Stein and Alice Toklas, a major correspondent of Alfred Kinsey, and an important link in the apprenticeship chain of tattoo history (plus he was the semi-official tattooist for the Hell’s Angels)!Check it out if any of those things are relevant to your interests, but after finishing it I think the biography’s main value is its detailed portrait of a gay life through the 30s, 40s, 50s, and 60s all together. The biography is 414 pages plus endmatter, but it’s readily accessible for public audience and definitely not boring.

It’s actually really a remarkable book, because without it Steward might have been forever a historical footnote, an odd character occasionally mentioned in relation to the more famous figures above, or mentioned only by his pseudonyms. But Justin Spring stumbled onto a historian’s wildest dream: an entire attic full of Steward’s papers, saved by his will’s executor. Not only that, but Steward was a compulsive record-keeper — hence the title, Secret Historian. Not only did he save piles of personal stuff and engage in extensive journaling, he also kept a lifelong record of every time he had sex. This actually seems to have been a not-entirely-uncommon practice among some gay men well into the eighties, and while again under other circumstances it might just be a diverting aside, Steward constructed his whole life around having sex, so this is his biography, and a unique one. In some years Steward slept with a different man an average of every two days, and in one summation near the end of his life, he reported having slept with “807 persons for a total of 4647 times.”

I commend Spring’s calm descriptions of Steward’s sex life, with no judgments one way or the other. Steward was complicated, an embattled mixture of pride and self-loathing, so it takes some patience and understanding to write about him. He made most of his life decisions based on his sexual proclivities — he became a tattooist halfway through life, leaving a successful career as a college professor to do it, because he enjoyed the physical proximity and had a fetish for sailors. (He was also into very violent sex, so be forewarned if that’s an issue for you). He had a lot of typical but problematic ideas about how gay men were gross and he could only have sex with trade, aka “straight,” “manly” men. (Conceptions of “straight” and “gay” have varied widely over time and often incorporate ideas of appropriate gender performance even more than sexual object preference, but entire books have been written about that). Unfortunately even with his close literary friendships, born of his youthful ambitions to literary fame, by the time Steward reached middle age he was actively advocating “detachment” from intimacy for gay men because it saved emotional stress and he remained very isolated most of his life because he wasn’t able to deal with the prospect of two gay men having a relationship. Thanks, fifties America.

I could ramble on about what a fascinating life Steward had for (clearly) 414 pages, especially about the books he finally managed to publish at the end of his life after being an aspiring writer for decades, but for your sake I’ll sum up: The book reads smoothly, and while I usually don’t like informational footnotes, these work nicely to provide information without derailing the narrative. I thought the literature got a bit shortchanged, almost waved away as not very good when I wanted to hear more, (BUT if you’re interested in that definitely read Jesse’s article linked above). And I have to quibble with the photo insert section — the pages are too small or not stiff enough or something, because I flipped through several times and didn’t realize there were pictures at all until I undertook a serious search. It’s a weird complaint, but it made a difference. Other than that, though, Secret Historian is a fantastic biography of a totally unexpected person!

What do you think? Do you like nonfiction reviews, and if so, what kinds of books? I promise I read just about everything (with a penchant for queerness, history and popular science) and would love to bring more of those reviews if y’all would like to see them!