Heeeey sorry about that two-week absence there! Finishing up the summer semester and time just got away from me. If it helps, pretend I was on this trip I actually took at the end of June. I visited Duke University in North Carolina for a week to do some research in the Rubenstein Rare Book & Manuscript Library. More on that — the research and the library — in later posts. I didn’t have a lot of time to sight-see, but made a few whirlwind stops: The Levine Museum of the New South (Charlotte), the Pauli Murray House (work-in-progress in Durham), and the Nasher Museum of Art (Durham). Plus some shopping and whatnot. Took this post’s featured image on the street in Durham.

Levine Museum of the New South

The Levine currently offers four exhibits: Cotton Fields to Skyscrapers on the New South proper (aka history after the Civil War), Nuevolution! on LatinX culture in the modern south, and then two photo exhibits. I rushed through the first two only to find the other two are tiny and honestly offered me nothing — maybe if I had more background info? — so I should’ve spent twice as much time on the major exhibits. (Note one of the photography exhibits was cycled out and replaced with a new one in July, so I can’t speak to that).

I quite enjoyed those bigger features, rushed as I was. Cotton Fields to Skyscrapers seemed to do a solid job focusing on that “effects of the Civil War” theme, and I loved the way they created a series of small immersive experiences. The part about Billy Graham is in a mini-church. The explanation of department stores is in a mini-store. Sections on segregation take place at a lunch counter, and there’s a little living room and TV set up with the TV showing actual broadcasts about boycotts and riots.

Front of a mini electric company.

Nuevolution brought me to the museum. I’d done some mock promotional work for it in a class last year because it’ll be coming to the Birmingham Civil Rights Institute and the Atlanta History Center over the next few years. It’s really cool, very engaging with a lot of interactives, but also a lot of information and personal stories about LatinX immigrants and locals. I’d love to see some usage numbers, but it was impressive and I definitely saw others interacting as I went through. (Wish I’d taken more pictures, this was the point where I was feeling super rushed for no reason).

Pauli Murray was a black queer woman deeply involved with the civil rights movement, who also became the first African American female Episcopalian priest. I met some people from the Pauli Murray Project at the National Council on Public History conference earlier this year, and had the opportunity to meet up with one of them for lunch and see the house while I was in town.

The house won’t open until 2020, but it was awesome to see it coming together and hear about the project’s approach. The house won’t be a house museum, but a Center for History and Social Justice, a kind of community center with a historic bent. The house reconstruction is only part of the overall Project — they also do basically anything with a thematic connection to Pauli Murray and her life. There was a mural project at some point, a kind of youth poetry/sermon slam, other stuff. Loving this whole thing, check it out!

The Nasher is a smallish art museum operated by Duke. I heard about a tour on the representation of place and place-based identity in art, so I went. The tour was kinda boring, to be honest, and seemed to focus on several specific artists’ lives rather than the topic alone, but in fairness I was very tired by Thursday evening and the other tour-goers seemed engaged. 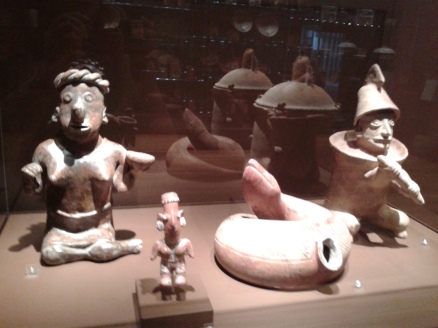 Three figures and a snake pitcher from the Mesoamerican collection. 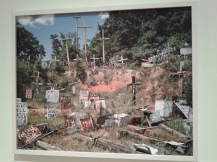 “If the Leader Only Knew” by Hank Willis Thomas — Sculpture of hands protruding from the wall and grasping a strand of barbed wire.

I was more impressed by the size of the museum. They manage to get a lot into their couple of galleries, from ancient pottery to contemporary photography, with descriptive labels so you can appreciate at least the general idea of a piece, you’re not abandoned to your own impressions. I also loved how vibrant and inclusive the place is, no stuffy definitions of high art. I’m told they’re doing a large show soon on the topic of Southern artistic identity and if such a thing exists, so I’ll be keeping an eye out for any web content/publications/traveling exhibits associated with that!