Kingsman and Man from UNCLE are two of my favorite movies from the past few years. They’re both action-spy movies, which means even though they base themselves on pre-existing media, they must reference the James Bond franchise somehow. Any new action-spy movie has to do that, but as comedies (even light parodies), it is absolutely imperative that they interact with the genre instead of just copying it. What I find interesting is both these movies deal with that by gently expanding what’s “allowed” in a Bond-type production. 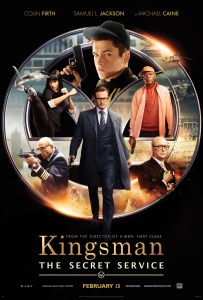 Initially I didn’t even want to see Kingsman, because it looked so incredibly white and male. White guy action movies are a dime a dozen, even if this one has that slight parody twist. But I love Colin Firth, (also the star of my very favorite queer movie, A Single Man). And I heard good things about Kingsman after its release, so I watched it. There’s more than meets the eye — it’s a “you’re totes special” story about a white kid being trained by white British aristocracy, yes, but this does not go unexamined.

One scene toward the beginning is representative: Galahad (Colin Firth) and Eggsy (Taron Egerton) drinking in a pub after Galahad has gotten Eggsy out of jail. Galahad launches into a rather typical list of questions about why Eggsy hasn’t done anything with his life, has quit everything he started, etc. When Eggsy makes a reference to his (abusive) stepfather, Galahad says “Oh, it’s always someone else’s fault.” But Eggsy doesn’t let it lie or try to deny it, shift uncomfortably in his seat, double down on his “excuses.” He leans forward and accuses Galahad of not understanding what it’s like to be born in a different class and do things because you have no choice, no other way to get through. And Galahad accepts it, then continues to work for more working-class representation in the Kingsman organization.

Eggsy is set directly against a group of toffee-nosed private school British kids in training, sparking explicit debates about class discrimination. It’s really important here that the discussions are explicit, not subtext, and I love the way Eggsy and the female candidate Roxy become allies against the “establishment” kids. Plus I’m always on the lookout for queer references, and I got more than I bargained for: The three final candidates in Kingsman training all get an assignment to seduce the same girl, and Roxy is totally game! And then there’s the greatest set of lines I’ve ever heard Colin Firth say:

Galahad, for his part, is a lovely inversion of the James Bond spy trope. He’s a badass, but he’s not a hardass. When he and Eggsy are threatened by hooligans toward the beginning of the movie, his quite honest response is “I’ve had a rather emotional day, so … I’d appreciate it enormously if you could just leave us in peace, until I can finish this lovely pint of Guinness.” The whole movie is of course a Bond parody… But a subtle one. You’re meant to chuckle at statements like Galahad’s, because you know the tropes he’s referencing, but you’re not meant to guffaw.

Unfortunately it gets super weird toward the end, including some bizarrely flamboyant gore and the problematic treatment of the Swedish princess, who is literally reduced to a cheap reward for Eggsy. Also, the villains are a black guy with a lisp (Samuel L. Jackson) and a girl with prosthetic feet. Is this supposed to be satire of Bond-type villains, or is it inherently problematic? In deconstructing and reconstructing the spy movie, does Kingsman perhaps reconstruct a bit too much? I loved it, but it’s also frustrating, and queer stuff remains quite subtle. 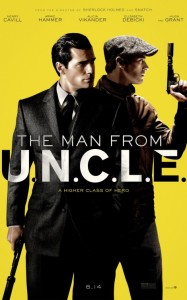 Then there’s The Man from UNCLE, which is equally awesome-yet-difficult. I’d been saying how gay it looked since the trailers, and wondering if they would dare show queer characters or if it would stay at the level of queerbaiting. I didn’t really expect gay characters — it’s based on an old TV show and was going for “big summer movie” appeal. However, I would argue it’s a little more than jokes.

For starters, the jokes are constant enough that they become part of the movie’s tone, and they’re “in the know” references, not “no homo!” ones. Tearoom and top/bottom jokes, plus the “Are these heels mine?” bit that appeared in a trailer but not the movie proper. Solo (Henry Cavill) and Illya (Armie Hammer) engage in all the bickering and one-upmanship that would lead directly to romance if they were male and female, and spend a good deal of time bickering about things like Gaby’s outfits when Gaby doesn’t care at all. There’s the “I’m allowing you to tag along” exchange featured in trailers:

Finally, while I love that Gaby (Alicia Vikander) had about a million times more things to do than the typical Bond girl, she’s also used in a way that’s very typical for setups like this: to legitimize, even distract from, the same-sex intimacy that’s at the core of the story. So as a whole, like Kingsman, it challenges the gender assumptions of the James Bond “ideal,” but doesn’t go so far as to include any out characters. (There’s more to say about Bond, the franchise is utterly fascinating as a cultural artifact and showed some hints of opening up in recent movies, but as of Spectre it’s once again a resolute symbol of emotionless heterosexuality).

I said in my post on the Man from UNCLE trailer that the action movie would be the very last space to be queered, and maybe that’s true, but I’ve seen the film since then. Man from UNCLE and Kingsman both expand the space in ways I hadn’t even thought about, especially in terms of class. Neither goes far enough, but just the presence of these movies as hits indicates that popular culture is getting more at home with the idea, so maybe there’s hope after all… Or maybe I should just be grumpy that they didn’t go all the way. What do you think?

3 thoughts on “Kingsman, The Man from UNCLE, and Queering the Action Movie”