The Keepers Trilogy is a middle-grade fantasy by Lian Tanner, consisting of Museum of Thieves, City of Lies, and Path of Beasts, published 2011-2013 and complete as a trilogy. It’s a hidden gem, found through sheer serendipity — I searched for the word “museum” in my library’s ebook database to see what came up, and Museum of Thieves was the only result. I went on to get all three and cry when they were over. I’d call it dystopian, focused on the treatment of children within a larger society, but it’s also fairy-tale-like, a bit unrealistic on purpose. While it has its heavy content, it’s not as dark as a YA dystopia would be. I listened to the audio, narrated by Claudia Black, and can highly recommend it.

Museum of Thieves is a parable about growing up. Not about adolescence, but about that half-remembered experience of learning to worry about things. Learning that there are things in the world to worry about, but also learning how to deal with those things competently. At the same time, a feeling of fear at all the huge unknown dangers that you’re starting to see, but that you realize can’t be controlled — war, famine, disease — and that’s where the Museum of Dunt comes into play.

It’s a museum of good things and hidden things and secrets and thieves, but also a place of very old magic, and the place where the villagers of Jewel pushed all the terrible things. They’ve sheltered themselves so much that nothing “bad” happens… But they’ve lost the ability to cope when anything does happen. They live in permanent fear of outsiders and their own leaders, and they fall prey to a thousand small injuries to their sanity and dignity in the name of safety. Children are chained to adults (or their beds) to keep them safe, and Goldie — our heroine — panics the first time she gets a little cut. But she learns to cope, and brush these little things aside. While the museum keepers teach her to steal things and pick locks and melt into the shadows, she also learns competence and how to think of resolutions. Despite the little lessons and “teaching moments” in dialogue, they’re not annoying, the character-development fragments are subtle and fascinating.

I particularly liked that it’s a typical boy-and-girl setup, but the girl is the protagonist, and they’re not blended together over the course of the book. Toadspit (the boy) isn’t even there much of the time, and for much of the book they actively dislike each other. Through shared experiences they come to respect each other’s work, and that leads to a level of friendship that continues to deepen over the course of the trilogy, but they’re not considered a unit. And adults are still prominent as players in the story and figures of power, like they are in real life, good or bad.

The worldbuilding comes in tantalizing pieces — why do all children learn sign language? What exactly does a “Fugleman” do? What do the strange animals look like? We can infer from their names, like “slaughterbird,” but those kinds of casual references really made the place come to life as a somewhat-urban fantasy country. Their seven-god religion is mentioned in the same way, and just as interesting.

City of Lies expands all this, foll 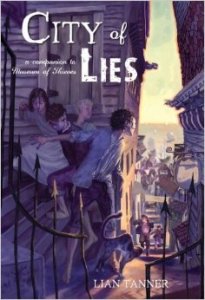 owing logically from the first, with an interesting new setting and characters without losing the tone or the beloved people from Museum of Thieves. The Festival of Lies is perfect for this series and plays into a clever plot that’s more subtle than the first. There’s one little pacing hangup I won’t mention for spoilers, but it’s balanced by a moment of sheer magic you’ll know when you see, and this second book moves us inexorably from the first installment to the last.

I also liked the way Goldie was separated from Toadspit and the others, directly leading to increased independence and an ability to build a new friendship network. She refines her skills in learning who to trust and we get several invaluable new characters through it. And again, there’s no stupid “girls can do anything boys can do” lesson. It’s very naturally an adventure book about a girl, including a scarily warlike princess, without eliminating boys or making gender a factor at all.

Path of Beasts is the final development, encompassing the first and second books and bringing them to their full completion. It’s terrible and wonderful and big, like the whole series has been. So much bigger than it seemed when I stumbled onto it unawares. I don’t think I can even tell you the rest of how I feel about it, I’m still processing a week later.

I can talk a little about Goldie, though, and how much I loved her themes here. She has to handle not only her fear, learning to cope with life as an adult, but a seemingly uncontrollable anger personified by the Wolf-Sark inside her. And she should. She is angry. She’s been imprisoned physically and emotionally as long as she can remember, been told that she doesn’t matter and has no control over her life, and that anger’s been building inside her all along. I love that. A lesser writer might make her simply afraid, but no. It’s much more complicated.

Goldie has to learn not to shove these things down, but not to give into them either: To greet her fear and anger as old friends. To use them. And finally to let them go. It’s not a moral, or a lesson — it’s life. And as a trilogy, it’s life. It’s about how you don’t just “solve” something and that’s it, happy ending. Sometimes it takes three books of wrestling and setbacks and conflict and doubt and anger and despair, but you can eventually be finished and start something new.

I’d also like to say how much I love the character of Pounce, introduced in book two, and the complexity he represents for all the characters. That he can betray them all, and save them all, and be in it for himself but help others almost against his will. That he doesn’t turn out to have a heart of gold, or a heart of stone, just a heart, flawed and bitter and good and human. The same for Double, an adult in book three. Especially the same for all the children, though, who are given internal (and external) lives of a depth I’ve never seen before in middle grade.

There are questions left unanswered, but that’s fitting too, with the kind of big mysteries the Keepers trilogy offers us. It’s just amazing. Please read it.

5 thoughts on “Review: The Keepers Trilogy by Lian Tanner”