In early 1960s London, barrister Melville Farr (Dirk Bogarde) is on the path to success. With his practice winning cases and a loving marriage to his wife (Sylvia Sims), Farr’s career and personal life are nearly idyllic. However, when blackmailers link Farr to a young gay man (Peter McEnery), everything Farr has worked for is threatened. As it turns out, Farr is a closeted homosexual — which is problematic, due to Britain’s anti-sodomy laws. But instead of giving in, Farr decides to fight. (Google synopsis)

A slightly lackluster auto-synopsis for what turns out to be a fascinating movie. While wondering about the blackmailer’s identity adds some suspense, Victim is a drama rather than a mystery. It reminds me of a stage play, something like The Crucible, a set of philosophical arguments given life and dialogue. That’s not to say it’s terribly didactic or unrealistic, just that it’s spun around a question, and everything in it pertains to that question.

The question of course is “Should homosexuality (continue to) be illegal,” as it was when the movie was made. This was one of the first movies to portray a gay man in a sympathetic light, and the first English-language movie to use the word “homosexual” at all, which would make it historically significant in any case, but it is also credited with real impact on culture at the time. The arguments for equality are simple, but I believe affecting, and those laws were repealed in Britain by 1967. The movie doesn’t sensationalize the gayness, but confronts the contemporary laws against it rationally and patiently. It was an incredibly brave project given the censorship regulations at the time, and particularly for the stars, since Dirk Bogarde (a major British star at the time) was almost certainly gay himself but never came out, even into the 90s. We’ve come a long way, but the arguments presented in 1961 are still relevant, and that’s very sad. 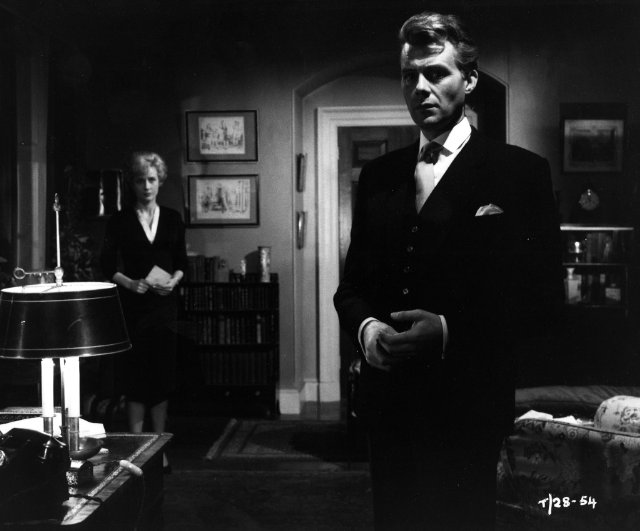 Back to the movie, though. As mentioned above, it’s like a play, heavy on dialogue. I’m pleased to report the acting holds up. While all the men look vaguely similar at the beginning — all cleancut grayscale Sixties men in suits — they quickly differentiate themselves in demeanor. Bogarde in particular carries the film, as well he should, portraying an immensely believable character who’s intelligent, driven, frustrated, and haunted, but always with a respectable face. It takes tremendous skill to convey that much suppressed emotion, but he’s flawless. I can only assume his personal life informed those acting decisions, and I’m deeply grateful for it.

I can come up with a few criticisms… The plot is necessarily simple, although there is one very strange little subplot about a couple observing goings-on in the gay bar. I think it was meant for comic relief, or as a red herring, but it was exceedingly brief and mostly just odd. The movie is also a bit of a slow starter to modern eyes, beginning with a very slow “chase” scene. Beyond that point, though, it’s gripping. Highly recommended for entertainment, for historical value, and for those who want (or need) to start at the very beginning in the rationale of queer rights.