The original “Terror of the Zygons” is one of my favorite Doctor Who episodes ever, so I was hoping to love this one, but honestly I was just a bit bored. That’s a statement about me, though — all things being equal, I generally prefer episodes set on alien planets. Modern-day Earth episodes don’t interest me as much. They certainly do make Earth episodes I like, but they just didn’t happen to do it this time, and that’s fine. Preference doesn’t equal quality. That said, there were some things I appreciated and other things I didn’t.

I liked the opening with the two Osgoods — it effectively mimics the characters’ brief experience of not knowing whether they themselves were humans or Zygons. The audience doesn’t know which Osgood is which, and that’s what allows us to understand the similarities between humans and Zygons, with no “good guys and bad guys.” Also, the presence of the Zygons makes it almost seem like they planned Osgood’s death and revival all along… but either way, I don’t see any reason to complain. Not only because I like Osgood — I like her, I don’t necessarily adore her — but because revivals of this style are typical for this and many other franchises, and I have other things to worry about.

I must also say that I appreciate how Osgood has evolved as a character beyond a fangirl, someone who’s taken that love for the Doctor and used it as inspiration. (Another example of the Doctor’s positive influence. Ahem.) As a member of Amnesty International, I appreciate the depiction of Osgood’s bravery — peace-focused, a different kind of courage than a warrior or a soldier would have. Her willingness to invest her identity in being both the Other and the Us and to calmly not answer all the questions and doubts leveled at her. Some of the dialogue was clunky, another blogger called it “Moffsplaining,” but I at least like the character development. Also, I liked the preponderance of female characters, presented without gender comment. (But the last time I said that it turned out I’d totally missed how the episode was all about abortion, so take that with a grain of salt.) 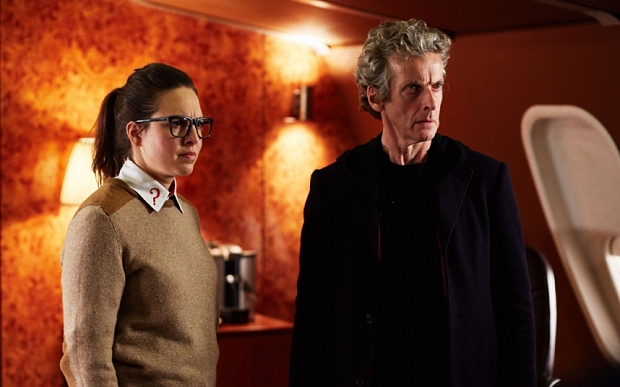 Speaking of politics, I do appreciate that they’re using the modern-Earth episode as a way to talk about modern Earth themes. I like it when the setting isn’t just scenery, so to speak. I felt the political stuff was moderately subtle, by which I mean the themes aren’t hidden but the episode isn’t super-obvious propaganda either. And I like that it held together, with the political ethics layered over shapeshifter problems. I like that the Zygons can be read as several different real-world groups. The fact that they’re shapeshifters means they function as an invisible minority, taking on the faces and mannerisms and lives of the soldiers’ actual real family members. Once the soldiers see that, they can’t shoot them, for better or worse, while others persist in calling them “things” and don’t engage emotionally — again, for better or worse. It’s the perfect way to do invisible minorities in a sci-fi setting and to portray “them” as “them” but also “us.”

Of course, it maaay be slightly problematic that as the invisible minority who want to become visible, the method they’ve chosen is to hide in plain sight and then KILL EVERYBODY. And by “maaay,” I mean THIS IS PROBLEMATIC. It’s just like in “The Rebel Flesh/The Almost People,” when they spent TWO WHOLE EPISODES talking about how the Flesh were people who had rights and were just like us, and then the Flesh TURNED INTO ENORMOUS SLAVERING CAMEL-MONSTERS AND TRIED TO KILL EVERYBODY. Way to make invisible minorities seem less threatening. In reality we are the oppressed and it’s the oppressors who want to make us seem horrific.

Finally, I did love the Clara twist! Apparently it was obvious to some viewers, maybe I just wasn’t paying much attention, but I was soooo sitting there thinking how obvious it was that the other woman was a Zygon. I noticed Clara was acting a little flip, given the situation, but I didn’t think anything of it. The twist very much enlivened the episode for me, and I get the distinct impression there will be more surprises in the second half, so we’ll see where all this goes.

2 thoughts on “Doctor Who Review: The Zygon Invasion”