Ohhhhmygod, y’all! That was much more intense than I expected! A streamlined plot AND an awesome deaf character AND an underwater setting AND a genuinely gripping cliffhanger all in one go?? I was pretty into “The Magician’s Apprentice/The Witch’s Familiar,” as you know, but “Under the Lake” left more excited for next week than either of those.

I’m just so, so happy that there’s a real plot here, not just bells and whistles. No bizarre left turn, just thickening. It’s a classic Who set-up, getting a bunch of characters into a confined space and then adding a sci-fi monster, but it’s a classic because it can really work if all those elements are done properly.

The characters are engaging and differentiated — Cass, the leader of the team, is a smart and resourceful and awesome chick. She’s also deaf, with a personal sign-language interpreter, but while she does use her ability to lip-read for the plot, her real plot-significance is that she can figure out the answers to the story’s questions. She’s great. I did wonder why this future couldn’t provide some kind of assistive technology instead of an entire interpreter, which I’d think would be more expensive for the company, BUT I loved that they were close but not treated as a unit, and I loved that he was cool and brave in his own right. The other characters don’t get as much screen time, but the highest compliment I can give is that no one is “the annoying one” and I still remember all their faces and care what happens to each of them.

The other two elements of the set-up also work splendidly. I love an underwater setting and they had several good shots. The sci-fi monster(s), too, were just interesting. It’s a ghost — it’s making more ghosts — it’s trying to tell us something — it’s not trying to tell US anything… I loved the way the script teased the questions out one at a time, drawing the viewer into the plot, trying to predict the answers. There are still questions to answer in the next episode, and OH GOD the cliffhanger. YES we all know the Doctor isn’t going to die, but I MUST KNOW HOW THIS IS RESOLVED and I must know it NOW.

The negatives for this episode really relate to the series as a whole. For the second time this season, the only black character died before the intro. Seriously, twice in a row, people. Then, it seems Clara’s back in gung-ho “Let’s have an adventure!” mode. I really wish they’d make up their minds what kind of character she is. And while the Doctor’s prompt cards were funny, his characterization regarding interpersonal skills is inconsistent. The jokes happen, but rarely enough that I forget “insensitivity” is meant to be part of his character. 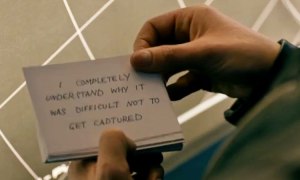 Still, I’m very impressed by this episode’s success with a new villain. Sometimes they just seem made-up, like Colony Sarff, but this one actually commits to one concept and doesn’t answer its questions too soon. I can’t wait for next week’s conclusion, slightly changing the set-up but, I trust, delivering the promised resolution. And these two-part episodes were an awesome, awesome choice for the season!

9 thoughts on “Doctor Who Review: Under the Lake”