I think it’s fair to say Iron Man launched a monumentally successful series of movies. It’s also fair to say Iron Man was a surprise hit in many ways, so Marvel didn’t exactly know where they were headed at the time. In the years since the rather unfortunate Iron Man 2, the Marvel Cinematic Universe has learned a valuable lesson: Each movie doesn’t have to be bigger and better than the last. Instead, each movie should be the same, but different. With every addition to the lineup, Marvel has to give us what we want, but in a cool and unexpected way.

The MCU also has the distinction of being a decades-long undertaking. That means, unfortunately, actors won’t stick around in the MCU forever, so the writers have to keep 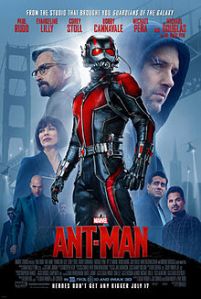 introducing new characters. Again, making them similar enough to the old ones to give us what we want, but different enough that we don’t get bored. I very much enjoyed Ant-Man on many levels. I mean, Hope Van Dyne is pretty much my new favorite character of everything, ever. But in the light of the MCU’s longterm needs, Ant-Man is even more of a success… It’s Iron Man, but different.

There are superficial similarities — sure, sure, it’s an origin story about a guy in a suit — but “guy in a suit” is actually a pretty distinct superhero trope. There’s a whole buffet of options, from “alien” to “chosen by the gods” to “scientific accident” and more, but “guy in a suit” is a particular favorite because it’s so overtly linked to humanity and human achievement. And this suit isn’t just another redesign of the Iron Man suit. It’s a totally new power that allows for a whole new landscape. Neither movie totally relies on flash-bang, but the Iron Man movies give a lot of space to special effects and cool ideas, and Ant-Man can do the same thing.

The movies have similar structures, starting with motivation, then the hero figuring out his suit, then there’s a big boss battle with the hero vs. a scarier version of his own suit. That’s pretty typical for all kinds of movies, of course. There’s also the previously-mentioned Hope Van Dyne, who’s basically “Pepper Potts with a grudge and superpowers,” not that I’m complaining, but more about her in a later post. We also see the same tone and humor in the two movies, the same corner of the MCU, smaller-scale and memorable for the snark combined with enthusiastic situational comedy.

The thematic similarities are more striking. Tony Stark starts at the top, a rich genius with everything he wants at his fingertips, but he’s wasting it. He’s disconnected from everyone and everything. He has no family, and his friends are just putting up with him. His story is about dropping to the bottom and re-grounding himself. On the other hand, Scott Lang is starting from the bottom, literally in prison the first time we see him, with only a handful of possessions to his name, and not many job prospects as an ex-con. He has a daughter though, Cassie, and he’s trying to work his way up because he desperately wants a relationship with her.

Tony Stark had pretty obvious father issues, living in his shadow, wishing for his father’s love. Ant-Man takes that theme and makes it the whole movie, with Scott wanting to be a hero for his daughter, with Hank Pym pushing his daughter away trying to protect her, with Hope resenting his rejection but loving him anyway, with Hank and Darren’s failed mentor/apprentice relationship and the same spark between Hank and Scott. (Not to mention Cassie’s new stepdad, and can I say how much I love the happy nontraditional family developing with them at the end?)

Finally, it’s entirely fitting that a feud between Pym and the Starks is what keeps the Avengers out of this movie. (Well, for the most part). It’s effortless compared to other movies’ explanations or total lack of an answer to the obvious question, “Where are the rest of the heroes?” It’s partly Pym being selfish, of course, but he does have a point. He doesn’t want that Pym particle going anywhere, much less right into Tony Stark’s hands!

In case you couldn’t tell, I think Ant-Man is a win. There are a few flaws, but it’s a fun movie with great characters and solid themes that hold up throughout the movie. It’s a visual treat, and I don’t even like bugs. It’s also the perfect next step in Marvel’s grand master plan, because it proves they can keep it going. They can build on the mythos we know and love, giving us new movies in the spirit of the old, and that’s exactly what’ll keep us watching for years to come.

16 thoughts on “Ant-Man is the New Iron Man”