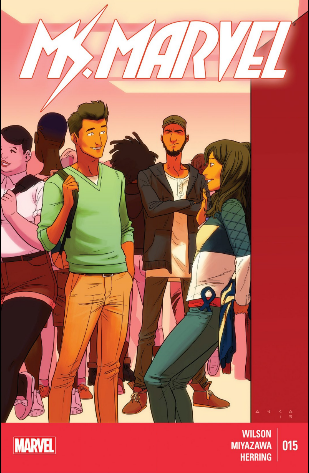 This’ll be a short review, because there’s just so much I don’t want to spoil! Ms. Marvel #15 is a triumphant ending to the Kamala-crush arc. It’s everything I hoped it would be — Kamala realizes Kamran is a jerk, indeed a villain, but more importantly she realizes that it’s not her fault. Kamran tries to put it on her, that she agreed to get in the car with him so whatever happens is her fault, and if she’d just shut up and listen she’d agree with the bad guys… But no. She’s crushed for a minute there, she really really liked Kamran and with good reason at the time, but she’s not going to put up with that. What Kamran does is Kamran’s fault, it’s not okay for him to cross her boundaries, and Kamala knows a villain when one speechifies in her face. Most importantly, she knows her value. I shouldn’t have doubted G. Willow Wilson for a moment.

There’s lots of action, lots of Kamala creatively using her powers, sweet stuff with Bruno. It’s a good issue. It’s got a “the end,” and it ties up the little Kamran arc, but there’s still a lot going on with the Inhumans that will presumably make up the greater portion of the next arc. And finally, there are some hilarious nerd jokes I’ll let you discover for yourself… They’re obvious, you won’t miss them. 😉