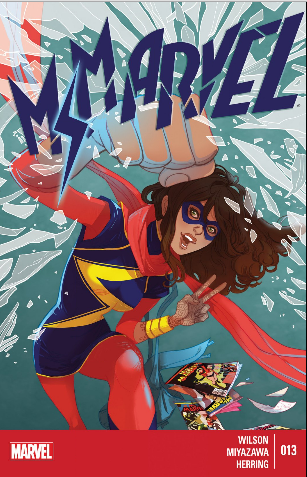 Just as a refresher, last month we had a Valentine’s special in which Kamala’s best friend (and superhero-gear provider) Bruno revealed (to the audience) that he has a crush on Kamala. The current issue was advertised as the one in which Ms. Marvel develops a crush on a newcomer. So, at first I was a bit resentful of this turn toward high-school romantic drama, and a bit suspicious of this whole issue, because I thought the past two issues had both been underwhelming. And where’s Adrian Alphona? Not drawing this issue, that’s where… Takeshi Miyazawa’s art is admittedly lovely, but the sight gags are such a part of my Ms. Marvel experience now. I just hope Alphona comes back. 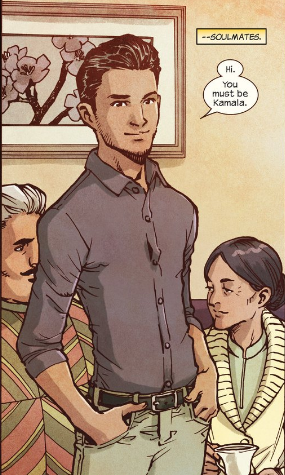 Then I started reading and thought, “Okay, I guess this is kind of cute.” Kamran is a childhood acquaintance of Kamala’s, and her parents are trying to set them up (because he’s getting early admittance to MIT, has great prospects, etc.), so of course Kamala resolves not to be nice to him when he comes over. Then we get the big “he turns around and she falls for his gorgeous face” scene… Except what really happens is he mentions he likes the same videogame she does and THEN turns around. She asks what faction he plays, and they start jabbering about videogames and Bollywood movies and all the nerdy interests they share. It’s kind of adorable. They immediately decide to go check out a little DVD store Kamran knows, chaperoned by Kamala’s brother, and that’s when the superheroic hijinks ensue. In a very Superman-esque scene, Kamala has to run off, change into her costume, and deal with a minor villain in the midst of her date. Back to the date in a moment.

The issue began with Ms. Marvel training in New Attilan’s gym. The audience knew she was an Inhuman already, but she only found out recently. This whole issue is tying her to the Inhumans more overtly than before. (I may have to go get some more comics and see what’s happening with the Inhumans right now, just for my own edification, but nothing confused me here). In addition to her association with Lockjaw and New Attilan, Kamala’s new villains are Inhuman terrorists who got their powers in the same incident she did, but who don’t want to answer to the queen (or anyone else). A parallel I didn’t even notice until Kamala spelled it out… 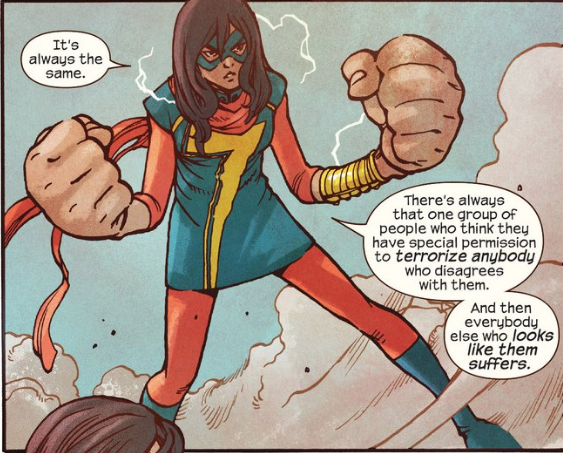 Kamala hurts the terrorist pretty bad, and is then horrified by the force she used. I assume we’ll be coming back to that in later issues. And theeeen… Kamran reveals he saw her going into the alley, so he knows he’s Ms. Marvel. But that’s not all. 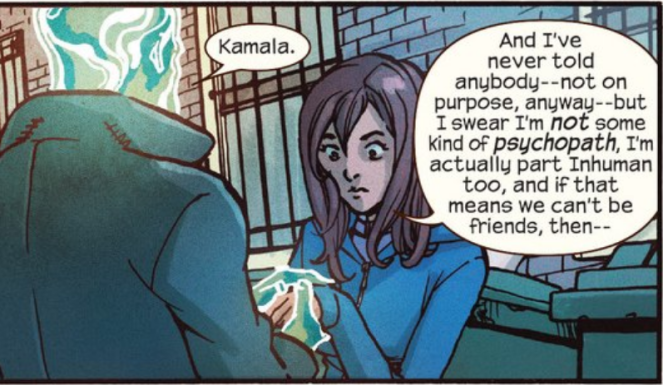 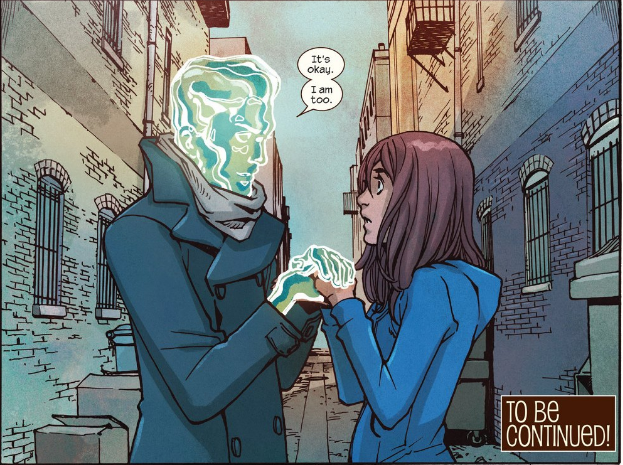 I take back everything I said. This is a brilliant plot. Will Kamala and Kamran get together? Will they become allies? Will he turn out to be a villain? Bruno wasn’t in this issue, how’s he going to react? I was afraid it would be boring and overdone, but this twist is the perfect thing for the series right now. It involves her family life, her friends, her superhero identity, and her connection to the Inhumans. Kamran really does seem cool, Kamala likes him for good reasons, they have adorable chemistry, and I wanna see what happens! Super excited for a great arc to come.