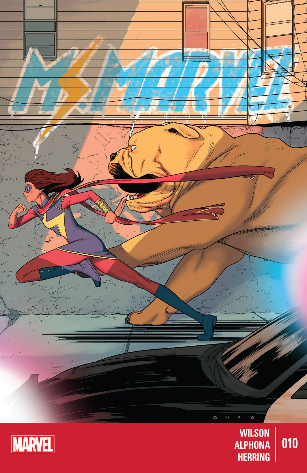 After a sad Ms. Marvel hiatus last month, we’re back with a very interesting tenth issue. In the cliffhanger of issue #9, we learned that the Inventor’s teenage human batteries are actually volunteers. It turns out that he’s convinced them this is the best way to save the planet, by using human power rather than oil. He’s convinced them that the young are a burden and too large a generation, parasites on the planet. 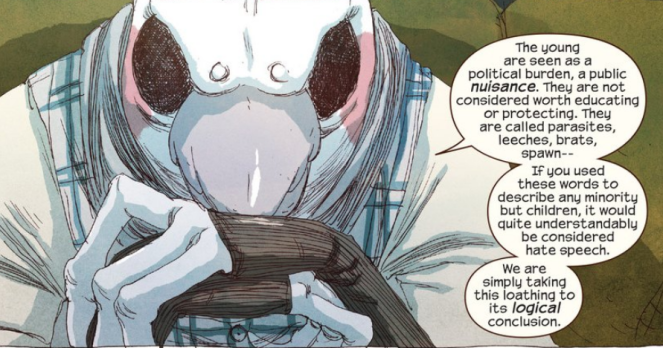 This is definitely something many teenagers can relate to, particularly as it concerns public discourse. There’s a pile of rhetoric about how the children are our future, but it usually comes across as a movement to control the children and bring about the previous generation’s vision of the future instead of our own. Positive encouragement can easily be drowned out by the overwhelming message that the young are annoying, shallow, not to be trusted, and not as important as adults. As Kamala says, “I get it. I do. The media hates us because we read on our smartphones.” Of course parents and guardians make any number of sacrifices for their children, but the Inventor didn’t target those kinds of teenagers — much as I don’t like Kamala’s parents, they’re generally presented as good parents who care about their children. You don’t see Kamala being swayed by the Inventor’s argument, not even a tiny bit. She believes she has value.

I’m entirely in favor of making superheroes prove they deserve that title. For most types of superhero comics, I take that seriously. For a risky character like Ms. Marvel, she was always going to have to prove herself anyway. The comic was aware of that from the beginning, came out swinging, and continues to demonstrate Kamala’s power in every issue. 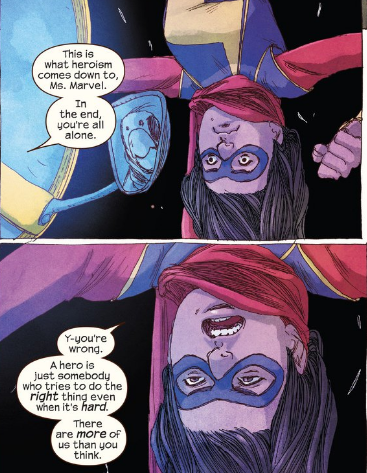 She’s brave. She can command a room, motivate herself and others. She doesn’t devalue herself or her contributions. She can mix it up with the best of them. My favorite part, though, is that she’s committed to doing the least harm. She looks for nonviolent ways to be a superhero. She centers her power in doing the right thing in every situation, to the best of her ability, rather than placing her value as a hero on her superpowers. I feel like I say I love her in every review, but I really can’t say it enough. This character is truly remarkable.

Finally, no Ms. Marvel review is complete without a sight gag. OMG the giant robot has a hat I can’t even stand it: 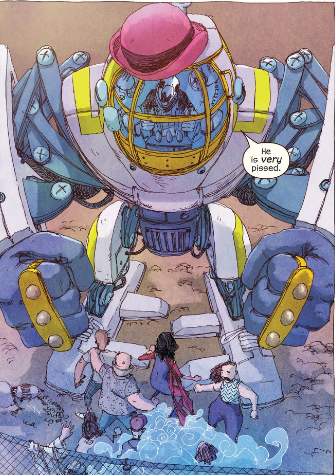 So many Mrs. Nesbitt jokes. So many.

The first arc/volume was five issues, the second will be six, finishing up next week. I’d love to hear what y’all think about this plot twist and the Inventor’s argument!