When I decided to do blog posts celebrating Talk Like a Pirate Day on the 19th, I immediately knew I wanted to mention Pastafarianism and the Church of the Flying Spaghetti Monster. At first I was just going to put it in a list of fun facts or give it an award for Best Use of Pirates for Religious Purposes (awards are coming tomorrow!), but I just couldn’t condense it down that far because it’s such an interesting topic and I want to unpack it a little bit.

So, let’s talk about Pastafarianism. You probably have a friend or two listed as “Pastafarian” on Facebook, or you may have never heard of it at all — basically it’s a satirical religion spawned in 2005 after Bobby Henderson wrote an open letter to the Kansas State Board of Education. His letter protested teaching intelligent design in schools by explaining the basic tenets of Pastafarianism (the universe was created by a Flying Spaghetti Monster, scientific evidence pointing towards evolutionary processes is nothing but a coincidence put in place by Him, etc.) and asking that Pastafarianism be given equal time in classrooms as well. The religion took off from there; you can find more info at that link.

Here’s the pirate-related part of the original letter:

Furthermore, it is disrespectful to teach our beliefs without wearing His chosen outfit, which of course is full pirate regalia. … You may be interested to know that global warming, earthquakes, hurricanes, and other natural disasters are a direct effect of the shrinking numbers of Pirates since the 1800s. For your interest, I have included a graph of the approximate number of pirates versus the average global temperature over the last 200 years. As you can see, there is a statistically significant inverse relationship between pirates and global temperature. 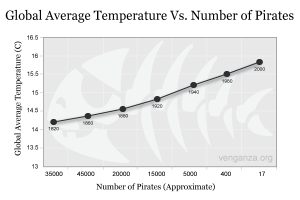 In further theological expansions, it’s been clarified that pirate regalia is appropriate attire because pirates were “the original Pastafarians,” peaceful explorers who’ve been maligned by historical misinformation. (Talk Like a Pirate Day was not created by Pastafarians, but has been embraced as a worthy holiday).

I’m not gonna lie, I kinda identify with this religion. I like it, and I relate to it.

On a more personal level — what if you’re wary of identifying with any particular religion, but you do identify with something, either as an ongoing thing or for a particular situation? Why not use a construct that’s totally inaccurate? I like the idea of being able to say “Okay, we’re going to use the term Flying Spaghetti Monster to conceptualize this, BECAUSE we can all agree it’s not really like that.” Then everyone can move forward, rather than stopping to bicker about God’s race, gender, heavenly architecture, or relative beard length. You don’t really risk people thinking God is LITERALLY a blob of spaghetti.

This brings me back to pirates. Pirates did actually exist, but weren’t actually peaceful explorers. There’s probably not much risk of people thinking they were just based on the CFSM, so this isn’t really a criticism of that, more of a comment on how interesting it is that we think of pirates the way we do. We really have taken a flashy, totally fictionalized concept and given people the vague impression that pirates were really like that. We now have a concept of “pirates” something akin to our concept of “elves” or “vampires” or even “gods” — fictional species with a few key attributes that can be reinterpreted by the next creator who comes along.

I’m not one of those historians who rants and raves about people’s misconceptions. Why would the average person need to know what pirates were actually like? I’m a historian, but my historical fields are completely different from those, so I don’t know what pirates were actually like beyond a few fun facts! I recognize that the “pirates” I like are kitschy creations, and I love them for it. I’m more interested here in how and why we fictionalize things the way we do, from pirates to gods, and I don’t have any answers, just a that’s goshdarn interesting, don’t you think?

You can give me your answers in the comments. 🙂

4 thoughts on “Pastafarianism: Gods and Pirates as Fictional Constructs”