Well, this episode was a bit silly. It kind of felt like the crazy adventures Eleven might have had in between episodes, and I’m not sure that’s entirely a compliment. It’s just so over-the-top and ridiculous, like one big bombastic joke. Robin Hood is a flashy uber-Robin Hood with uber-Merry Men in the exact sort of Robin Hood story you’d imagine, full of ridiculous bantering, archery contests, and leaping about. It’s so egregious that we’re almost set up to think there might be a big reveal of why it’s all so larger-than-life, but there’s not. That’s the big spoiler of this review — as far as we know, Robin Hood really is real. He’s not one of the robots.

But strangely enough, I liked the episode and I like it more and more. It comes in a fine tradition of robot historicals on Doctor Who, and it was about being heroic, about our legends of heroes. And maybe that’s the real point of Robin Hood being over the top — he’s doing it consciously, because he wants to be that kind of hero. He makes a choice to be larger than life could ever be. At the end, he decides he’s glad history only remembers him as a legend, because “History is a burden. Stories can make us fly.”

(As an aside, Clara seems less relevant in this episode, but she actually wasn’t. She’s a vital part of this heroism theme, because clearly she had a some hero-worship for and was thrilled to be gallivanting around with Robin Hood, but I loved that they didn’t play up any kind of romantic tension there. It was awesome that she could hero-worship someone and not swoon over him, and that they could be shown to develop a friendship and hug and everything without it being a romantic thing. It keeps the discussion on how we actually feel about our heros, not downplaying it as just a romantic attraction to someone who doesn’t exist.)

So, my question is, was this our “artist” episode, like “Vincent and the Doctor” or the Dickens/Shakespeare/Agatha Christie episodes? Is Robin Hood an artist, using history and legend as his medium? I think so. After about half an hour of being bemused and slightly disbelieving, the last fifteen minutes or so were really affecting for me, and I’m still not sure exactly what everything means. At the end, Robin tells the Doctor that the Doctor’s a hero too, and he tells the Doctor to remember, “I’m just as real as you are.” That line gave me chills. At face value, it’s a message to the audience about the stories we love, and to keep on loving them, and it’s a bit wonderful. 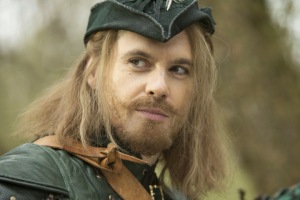 I also got chills because it sounds so ominous. Is it foreshadowing? “Robot of Sherwood” was about the Doctor learning to be a hero again from Robin Hood, learning he can be a story, but at the same time, we know the Doctor is a story already — almost a myth in the real world at this point. This part was done really well, not hammered in too hard, and I love stories like that. It’s so deeply meta, but they don’t have to tell us it is and make it annoying, you know? I could easily see this season following a kind of Loki: Agent of Asgard-esque plotline, using the medium of story itself to twist reality.

“Robot of Sherwood” continues asking the question of who this Doctor is, and I’m starting to like that the question wasn’t limited to Capaldi’s first episode. It’s looking like that’s going to be the recurring theme of this season. We’ve been given it before in other seasons and season finales, but this is a much more sophisticated treatment of that question hidden in plain sight… “Doctor who?”

4 thoughts on “Doctor Who Review: “Robot of Sherwood””