What is a toothbrush drill, and does it hurt? That was my question, anyway.

I volunteer at the Tannehill museum. One job, from a while ago now, was to catalog sixteen boxes of old photographs of Alabama mining communities. These pictures were taken by the Land Department of the Tennessee Coal, Iron and Railroad Company, often of buildings, but there were also lots of people (especially children) and a box full of May Day pageant pictures. There’s an unexplained fascination with taking pictures of schoolkids’ vegetable gardens in different communities, there are dozens of pictures of those. (One theory is it was a surreptitious effort to monitor the TCI’s effect on local water supplies). For whatever reason, they were interested in documenting major life events in their mining towns as well as daily life.

In amongst various pictures of children’s activities, behold, a toothbrush drill! 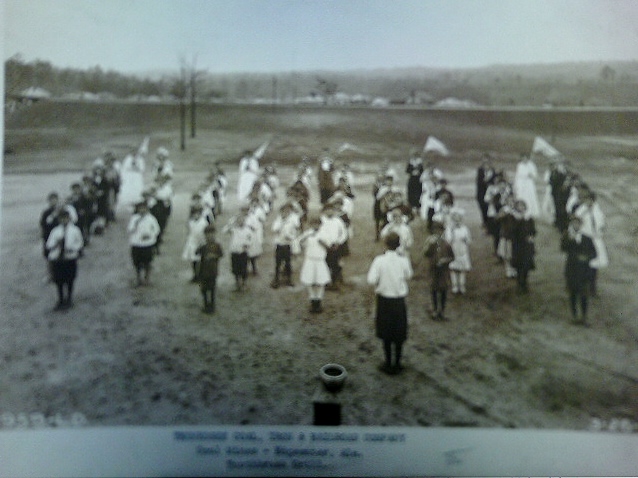 Toothbrushes had been around already, and wouldn’t really catch on until after World War II, but for some reason these toothbrush drills were a thing in the 1910s. They were a competitive school exercise. This particular one took place in Edgewater, Alabama, dated 3/26/17, at the white school. Everything was still segregated, and most of the pictures are labelled “White Schoolhouse,” “Colored Schoolhouse,” “Miner’s Garden,” “Colored Miner’s Garden,” etc. Usually the pictures were close to each other, and I was starting to wonder if the other school did toothbrush drills at all, but I did find one for them dated 11/7/17 — with 200 or more students in front of a schoolhouse in that one. (I held off posting this for about two months because my picture of that just came out a blur and I hoping to get another picture or a scan of it, but I haven’t been able to get back into that collection).

I did find a nice scan on Amazon of another drill in Fairfield, Alabama, dated 5/19/19, hopefully you can see this one better: 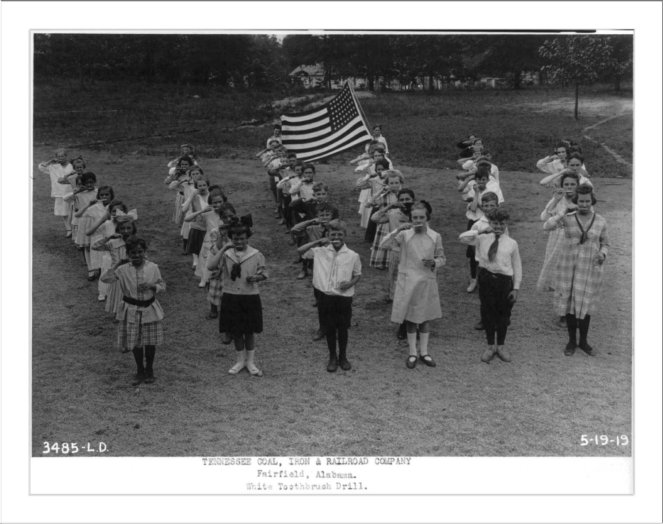 In a separate box dealing with Wenonah Ore Mine, I found a picture of a Toothbrush Cabinet. It looks like those big racks of apartment mailboxes with numbers on them, (and it does have numbers instead of names), but instead of opening, each box has a little cup attached to it with a toothbrush in it. Basically, toothbrushes were serious business in the South around 1917, and I have no idea why!

8 thoughts on “What’s a Toothbrush Drill?”