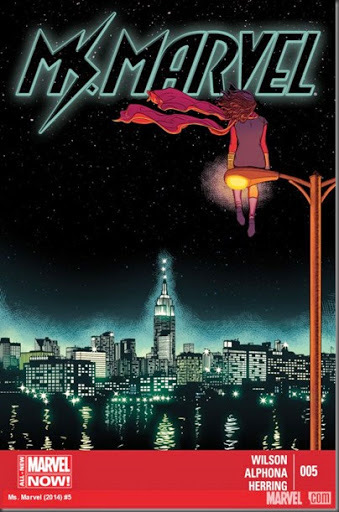 In this issue we get further toward real superheroics. Usually DC breaks things into 6-issue trade paperbacks, so every six issues there’s a big reveal, an injury, or what-have-you… Does Marvel do that? This is a first for me, reading a Marvel series from issue one in real time.

In this issue, Kamala loses her first big fight, and takes that as her cue to start training with her powers, developing a real costume, etc. As usual, I like her attitude.

There’s also more annoyance with her parents. Apparently some people thought that scene was sweet, but I didn’t. I remember what it feels like to be forced to do things while your parents literally have no idea what’s going on with you and are claiming it’s all because they love you. It’s not fun. I hope Kamala moves out.

After all that, she goes back and wins the fight with Bruno as her support staff, winning herself a supervillainous enemy in the process, and then she makes an effective public appearance in response to his threat.

There’s not much to this review, because I didn’t get a whole lot out of the issue… I still love Kamala and want to see what happens, I just felt like this issue was what the others have been leading up to, so nothing in it was really unexpected. I’ll be looking forward to #6, since I have no idea where we’re going from here!