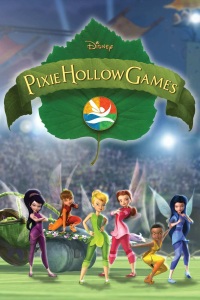 In Pixie Hollow Games, a 20-minute special, Tinker Bell’s friend Rosetta takes part in the Pixie Hollow Games despite her distaste for dirt. Rosetta is my second-favorite character, after Vidia. (I know, I’d be surprised too, except after Pinkie Pie turned out to be my favorite pony, nothing surprises me anymore). So, I really enjoyed seeing a little story about her, and I’d like to see them do more specials about the other fairies.

As far as the plot is concerned, I really liked how the focus was on participating in the games, not trying to win. It was a symbol of trying something even though it’s hard, and doing something for the sake of solidarity. I loved the moment when Rosetta’s partner stands up for her and them as a team even though everyone’s being disdainful of Rosetta. I also liked the message that it’s okay for Rosetta to love pretty, clean things, but also to participate in sports if she wants to. Dirt may seem like a silly thing to be afraid of, but I was really proud of Rosetta for doing something that scared her. That’s basically it — there’s not a lot to the story. The one thing I would’ve wanted was to make it more clear to the spectators that Rumble had cheated, because as it stands, it just looks like his partner wanted to screw him over for some reason.

I’ve really enjoyed watching these movies, despite the disdain with which they’ve been met around my house! I’ve liked them individually, but especially as a whole. I love being able to return to the world again and again and see characters develop over time without having to worry about some huge awful change happening. As standalones, I still think the second movie (The Lost Treasure) was the best, but all of them benefit by association with each other.

I also liked being able to do shorter daily posts, and in the future I’ll probably break more posts up this way when it makes sense to do so. For starters, next week will be about the C.S. Lewis books I’ve been reading. After that, I had a random impulse to go through my lists of favorite things and find out how many of them are about women, and I’ve got some lists of recommendations to post. Normal posts will continue afterward (and probably during), but I’m looking forward to these occasional week-long series as well. Hope to see you there!