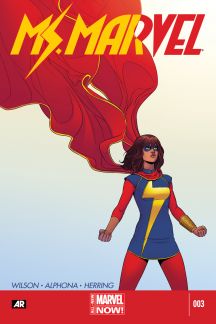 Back again with Ms. Marvel! I hope not every issue (and review) will be focused on Kamala Khan’s “Muslim superheroine” status, but again, that’s what makes the comic notable at this point, and this issue brushes up against her religion in a more explicit way. She attends a “youth lecture” at her mosque, apparently one of the few things she can do at the moment (she’s grounded). She and her friend are called out for talking during the lecture, and she says “Sorry, Sheikh Abdullah, but it’s really hard to concentrate when we can’t even see you,” at which point Sheikh Abdullah starts explaining how the partition and side entrance are for women’s modesty. She asks about the partitions in ancient Muslim times, then, because the partition and side entrance mean the Sheikh can’t see them either, they sneak out.

I’ll interject to say that I’m not deeply familiar with various Muslim practices. I took a course on the history of the Islamic world and did some extra reading, but it’s a rich and varied topic. I mention it because our class visited evening services at the local Islamic Center, where they did have a separate entrance for women and the women did sit behind a partition. The guests were separated by gender and went in the designated entrances, but we (the lady visitors) were given chairs where we could see both sides of the partitions during the prayers. Afterward we were invited into the male section to see the decorations and whatnot. So, I’m not entirely clear on how all that’s supposed to work, if it’s just segregated during prayers or if it only matters for Muslim women or what.

I don’t want to see Kamala become an atheist or throw off her religion entirely, and I don’t think that’s being set up. I do see her asking reasonable questions though. It behooves all of us to ask questions of our chosen religions, and I think her attitude is pretty realistic for most teenagers. Her religious tradition means something to her, as seen in the last issue, but maybe she’s not entirely sure what it means to her. Maybe she has questions about religious expression and how she wants to “do” her religion. Maybe she has other questions. I thought it was a good sign going forward that she can have a dynamic relationship with her own religion. I’m told the writer for this series is actually a Muslim woman herself (somehow I escaped knowing that already) so it’s good that Kamala’s not portrayed as hostile to her religion AND that everything isn’t perfectly rosy.

On the superheroic front, most of this issue still consists of Kamala asking questions. Pretty spot-on questions, like “What does it mean to have powers? To be able to look like someone I’m not?” That basically sums up the whole series. In addition to Kamala’s questions, there’s some tasty foreshadowing for a possible member of her support crew and a possible villain, and then in the last few pages Kamala gets into some biiiig trouble. No more details! Go buy the comic! Support your local comic store! The overall story and artistic quality is still good, and I’m still really excited.

Depending on funds, I may start reading another series or two on a monthly basis. I’m thinking about Loki: Agent of Asgard and Serenity: Leaves on the Wind, but do you have other titles you think deserve attention? What titles would you like to see reviewed?