In issue #2, Kamala saves someone’s life, gets a handle on her new transformation powers, and makes it home from the party.

I still love Kamala, and I’m really enjoying the art. I can’t wait to see her start interacting with other heroes, hopefully including her idol Captain Marvel!  I like the way she fumbles her powers, but still catches on quickly. I also really liked the way she drew strength from the Quran and her father when she was scared to help someone. 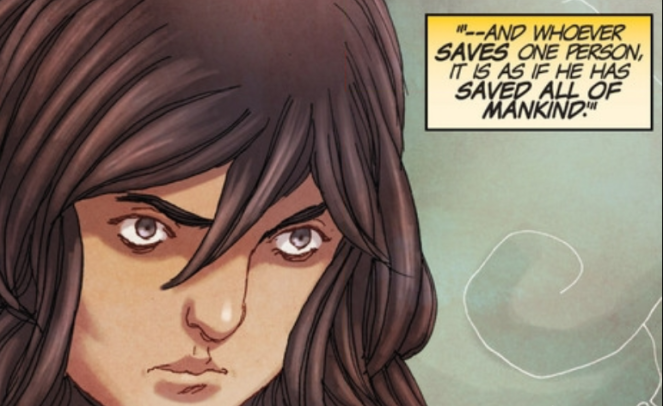 “There’s this ayah from the Quran that my dad always quotes when he sees something bad on TV. A fire or a flood or a bombing. ‘Whoever kills one person, it is as if he has killed all of mankind — and whoever saves one person, it is as if he has saved all of mankind.’ When I was a little kid, that always made me feel better. Because no matter how bad things get… There are always people who rush in to help. And according to my dad… They are blessed.“

I didn’t want to put up more than a few panels, but that voiceover is going on while she’s helping. She knows the girl who’s drowning, and she could’ve had any number of thoughts about that girl, but if she does, it doesn’t matter. She decides, and she moves. She runs in to help. There’s a pretty awesome superhero hiding in that girl, I’m telling you.

Kamala’s ruminations on being herself and not being happy while transformed into a perky blonde were heavy-handed. This should’ve been a “show, don’t tell” situation. This is kind of a big deal for this series, but I just didn’t feel it. It didn’t seem organic the way remembering her father’s quote did.

Less significantly, I just really hate it when teenagers get grounded in stories. The inclusion of Kamala’s family is important to this series, but I totally understand why parents are so often absent in YA fiction. Yes, Kamala snuck out and is hiding her powers from her parents, but parents shouldn’t just assume they deserve an intimate relationship with their children and punish them when the relationship isn’t there. I will give her dad props for asking her to explain it to him though, and I understand why she didn’t feel like she could. It’s not a bad relationship, their family seems pretty typical and I think it’s written well, so this isn’t really a criticism of the book but just a parental assumption of full disclosure that I find annoying.

On the topic of a well-written family, the moment when Kamala’s mom shouts at Kamala’s dad for moving the family to the US was pretty telling, and I think it mirrors any parent’s reaction to their child growing up. It’s frightening when your child’s culture is different from your own and you can’t understand each other. It’s even more pronounced in this case because not only does the next generation have a new culture, it’s also the culture of another country.

In summary, Ms. Marvel remains a good series with an excellent lead character and a lot of depth. I started off saying “Geez, it’s so annoying in comics these days that so little happens in each issue,” but I changed my mind while I was writing the review. This issue doesn’t cover much time, but there’s a lot of content in the hour or so it does cover.

Are you reading Ms. Marvel? Where do you think the story’s headed?