In my last post, “Reasons to Love History #6: Old Advertisements,” I talked about how important old ads can be, and how much fun they are. This is another fandom example, but a much longer one. I found a Doctor Who ad in the back of an old novel! Alas, it’s not an ad for the original show, but it is advertising the first tie-in novels! 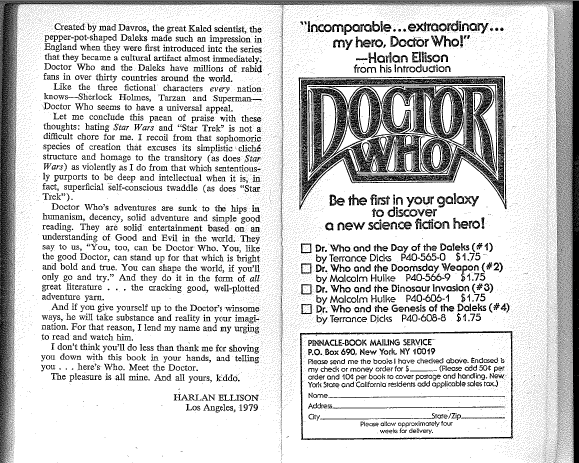 (The novel is Jesus on Mars by Philip Jose Farmer, a Pinnacle sci-fi paperback published in 1979, if anyone’s interested. It’s super boring so far, but the premise is that Jesus has been living on Mars and now wants to come back to Earth, and I have to finish it to figure out if it’s actually Jesus or what.)

What’s more, this particular ad (several pages of text before the price page) takes the form of a diatribe, written by that famous science fiction author and well-known asshole, Harlan Ellison! Among many other things, he wrote the script for “The City on the Edge of Forever,” widely considered to be one of the best episodes from Star Trek: The Original Series. What does that have to do with Doctor Who? Let’s find out.

An extended document also served as the introduction for the first ten of these novels, which were actually intended to bring Americans who’d never heard of Doctor Who into the fandom. You can read the entire thing online (https://groups.google.com/forum/?hl=en#!msg/rec.arts.drwho/KnkRRwZf5YQ/N6l2CwTGxnUJ). Even the short version is pretty long, but I’m including the whole thing, with the best bits in bold, and just for kicks, running commentary on the differences between this short ad version and the longer book-introduction version. (I left the inconsistent italicizing as-is).

They could not have been more offended, confused, outraged and startled… There was a moment of stunned silence… and then an eruption of angry voices from all over the fifteen-hundred-person audience. The kids in their Luke Skywalker pajamas (cobbled up from older brother’s castoff karate gi) and the retarded adults spot-welded into their Darth Vader fright-masks howled with fury. But I stood my ground, there on the lecture platform at the World Science Fiction Convention, and I repeated the heretical words that had sent them into animal hysterics:

“Star Wars is adolescent nonsense; Close Encounters is obscurist drivel; ‘Star Trek’ can turn your brains into puree of bat guano; and the greatest science fiction series of all time is Doctor Who! And I’ll take you all on, one-by-one or all in a bunch to back it up!”

Auditorium monitors moved in, truncheons ready to club down anyone foolish enough to try jumping the lecture platform, and finally there was relative silence. And I head scattered voices screaming from the back of the room,”Who?” And I said, “Yes. Who!”

(It was like that old Abbott and Costello routine: Who’s on first? No, Who’s on third; What’s on first.)

[I haven’t been able to ascertain if he actually said all this at a convention, or indeed, if he actually wrote this introduction, but the fact that there’s a longer and even more rude version that they tried to tame for the public in this ad kind of indicates that he did.]

After a while we got it all sorted out and they understood that when I said Who I didn’t mean whom, I meant Who….Doctor Who…the most famous science fiction character on British television. The renegade Time Lord, the far traveler through Time and Space, the sword of justice from the planet Gallifrey, the scourge of villains and monsters the galaxy over. The one and only, the incomparable, the bemusing and bewildering Doctor Who, the humanistic defender of Good and Truth.

My hero! Doctor Who!

[In the long version, he elaborated, “the humanistic defender of Good and Truth, whose exploits put to shame those of Kimball Kinnison, Captain Future and pantywaist nerds like Han Solo and Luke Skywalker. My hero! Doctor Who!” They actually cut him off MID-SENTENCE to keep him from saying that in the ad, presumably to keep him from offending potential readers too much.]

For the American reading (and television-viewing) audience (and in this sole, isolated case I hope they’re one and the same) Doctor Who is a new factor in the equation of fantastic literature. Since 1963 the Doctor and his exploits have been a consistent element of British culture. But we’re only now being treated to the wonderful universes of Who here in the States.

[An elided segment here includes: “I despise television (having written it for sixteen years) and I spend much of my time urging people to bash in their picture tubes with Louisville Sluggers, to free themselves of the monster of coaxial cable. And so, you must perceive that I speak of something utterly extraordinary and marvelous when I suggest you watch the “Doctor Who” series in whatever syndicated slot your local station has scheduled it. You must recognize that I risk all credibility for future exhortations by telling you this TV viewing will not harm you…”

Notice they include the bit about “Watch in whatever syndicated slot…”]

I suggest you watch the “Doctor Who” series in whatever syndicated slot your local station has scheduled it. This TV viewing will not harm you… will, in fact, delight and uplift you, stretch your imagination, and improve your disposition.

[He sang Doctor Who’s praises at length in the long version, and explained he was doing it “In case you’re a yotz who needs things codified simply and directly.”]

Now to give you a few basic facts about the Doctor, to brighten your path through this nifty series of lunatic novels. He is a Time Lord: one of that immensely wise and powerful super-race of alien beings who, for centuries unnumbered, have watched and studied all of Time and Space with intellects (as H.G. Wells put it) vast and cool and unsympathetic. Their philosophy was never to interfere in the affairs of alien races, merely to watch and wait.

But one of their number, known only as the Doctor, found such inaction anathema. As he studied the interplay of great forces in the cosmos, the endless wars and invasions, the entropic conflict between Good and Evil, the rights and lives of a thousand alien life-forms debased and brutalized, the wrongs left unrighted…he was overcome by the compulsion to act! He was a renegade, a misfit in the name of justice.

And so he stole a TARDIS and fled.

Ah, yes. The TARDIS. That most marvelous device for spanning the Time-lines and traversing all of known/unknown Space. The name is an acronym for Time And Relative Dimensions In Space. Marvelous! An amazing machine that can change shape to fit in with any locale in which it materializes. But the TARDIS stolen from his fellow Time Lords by the Doctor was in for repairs. And so it was frozen in the shape of its first appearance: a British police call box.

Unfortunately, the stolen TARDIS needed more repairs than just the fixing of its shape-changing capabilities. Its steering mechanism was also wonky, and so the Doctor could never be certain that the coordinates he set for time and place of materializing would be correct. He might set a course for the planet Karn…and wind up in Victorian London. He might wish to relax at an intergalactic pleasure resort…and pop into existence in Antarctica. He might lay a course for the deadly gold mines of Voga…and appear in Renaissance Italy.

It makes for a chancy existence, but the Doctor takes it all unflinchingly. As do his attractive female traveling companions, whose liasons with the Doctor are never sufficiently explicated for those of us with nasty, suspicious turns of mind. [Skeezy much? Trying to entice more viewers? If you go into an old Doctor Who episode looking for titillation, you’ll be disappointed.]

The Doctor looks human and, apart from his quirky way of thinking, even acts human most of the time. But he is a Time Lord, not a mere mortal. He has two hearts, a stable body temperature of 60, and–not to stun you too much–he’s approximately 750 years old. Or at least he was that age when the first of the 43 Doctor Who novels was written. God (or Time Lords) only know how old he is now!

Only slightly less popular than the good Doctor himself are his arch-foes and the distressing alien monsters he battles through the pages of these wild books and in phosphor-dot reality on your TV screens. They seem endless in their variety: the Vardans, the Oracle, Fendahl, the virus swarm of the Purpose, The Master, the Tong of the Black Scorpion, the evil brain of Morbius, the mysterious energy force known as the Mandragora Helix, the android clone Kraals, the Zygons, the Cybermen, the Ice Warriors, the Autons, the spore beast called the Krynoid and–most deadly and menacing of them all–the robot threat of the Daleks.

Created by mad Davros, the great Kaled scientist, the pepper-pot-shaped Daleks made such an impression in England when they were first introduced into the series that they became a cultural artifact almost immediately. Doctor Who and the Daleks have millions of rabid fans in over thirty countries around the world.

Like the three fictional characters every nation knows–Sherlock Holmes, Tarzan and Superman–Doctor Who seems to have a universal appeal.

Let me conclude this paean of praise with these thoughts: hating Star Wars and “Star Trek” is not a difficult chore for me. I recoil from that sophomoric species of creation that excuses its simplistic cliche structure and homage to the transitory (as does Star Wars) as violently as I do from that which sententiously purports to be deep and intellectual when it is, in fact, superficial self-conscious twaddle (as does “Star Trek”). [New subtitle for this blog: “Superficial self-conscious twaddle.”]

Doctor Who’s adventures are sunk to the hips in humanisim, decency, solid adventures and simple good reading. They are solid entertainment based on an understanding of Good and Evil in the world. They say to us, “You, too, can be Doctor Who. You, like the Doctor, can stand up for that which is bright and bold and true. You can shape the world, if you’ll only go and try.” And they do it in the form of all great literature…the cracking good, well-plotted adventure yarn. [He gives some examples of “elegant trash” like Edgar Rice Burroughs. Perhaps Mary Shelley, I can’t tell if he’s still on the same topic by then.]

And if you give yourself up to the Doctor’s winsome ways, he will take substance and reality in your imagination. For that reason, I lend my name and my urging to read and watch him.

I don’t think you’ll do less than thank me for shoving you down with this book in your hands and telling you…here’s Who. Meet the Doctor.

The pleasure is all mine. And all yours, kiddo.

To be clear, I LOVE Star Trek and am fairly fond of Star Wars, and hate to be on Harlan Ellison’s team, but I have to concur that Doctor Who is awesome. Even jerks can write great sci-fi and like great shows. I haven’t read any of these alleged novels, though, and I really wonder if they can be as great as this ad makes them out to be. Maybe that’s the secret, the strategy to get people to buy them. What do you think?

8 thoughts on “Old Advertisements: Harlan Ellison on Doctor Who”