Ads and sales catalogs are invaluable for historians and archaeologists who are trying to determine an object’s purpose. You’d be surprised how hard that can be. I volunteer in the back of a local museum on occasion and I’m regularly befuddled by some of the items back there, and those are only 150 years old. Plus, seeing an ad and imagining you can actually go out and buy the thing is basically a window into the past, and it’s basically hilarious to see the ad copy sometimes.

I’m the proud owner of a Timewarp comic from 1980, containing an ad for Star Trek: The Motion Picture. I was already feeling the 80s vibe from the comic, and when I read “Now playing in a theatre near you,” I really felt for a second that I could go out and see this awesome new movie based on my favorite show. That’s the closest I’ve ever come to time travel, my friends, and it was awesome. 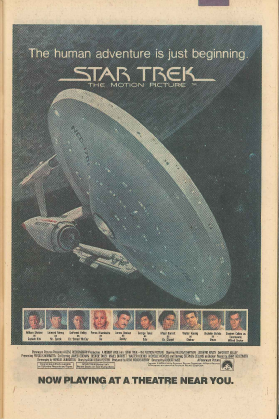 I also recently found a Doctor Who ad in the back of an old sci-fi novel, and it ended up meriting its own post. Stay tuned — coming up next!

Reasons to Love History #5: Messages from the Past

Have you ever come across an old advertisement that was so awesome you just had to share?