Quick dictionary:
Ship is shorthand for wanting two characters to be in a relationship. More on this later.
Canon is what’s really happened on the show in question, as opposed to fan stories and hypotheses.
Slash is a fan term for shipping two gay characters. K/S, Johnlock, and Destiel are very popular examples of slash couples.
K/S is Kirk and Spock on Star Trek (mainly the originals, also the characters from the new movies)
Johnlock is Sherlock Holmes and John Watson (mainly on the show Sherlock, also in general)
Destiel is Dean Winchester and Castiel on Supernatural (I’m currently watching the show from the beginning, am somewhere in season 4, and only know Castiel a bit, so just a few mentions here)

I’ve always loved Sherlock Holmes, but I’ve only recently joined the Sherlock fandom. It’s a newer show with a relatively young fandom, so there’s a huge contingent of John/Sherlock shippers. Knowing that I ship various slash couples, people often as if I ship Johnlock. The answer is: Sort of, in the same way that I ship K/S. 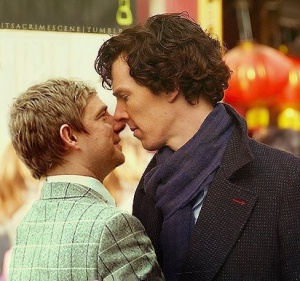 There are a number of possible meanings and usages for the term “ship.” Some people ship friendships. Some people mean they enjoy a canon couple. Often, it means wanting a particular couple to actually occur on the show. Some people mean they think two characters are “actually” having a relationship off camera. (It’s worth noting that this does happen for dramatic purposes, there may be a reveal that two characters have been sleeping together for ages). Many K/S shippers are in this last category. One popular theory has it that Kirk and Spock were flirting all through the original Star Trek series and consummated the relationship between TOS and The Motion Picture. Others think they were a secret couple all through the show and movies.

The point is, nobody knows. I don’t have to know. In these cases, especially K/S, I’m not sure I want to know. I ship Kirk/Spock and Sherlock/Watson, but for who and what they are. They’re best friends. They love each other. We see that time and time again. I love seeing them onscreen together, I root for their relationships, I want to see them express how they feel, and I eat it up when they do. But none of that has anything to do with whether or not they’re “boyfriends” or “in a relationship.” They clearly love each other, and I don’t care in what way they do it, and I like to see non-romantic intimate friendships on TV too. I basically feel like K/S and Johnlock are the same either way. So I guess in some sense I’m the type of shipper who’s just enjoying a couple that’s already there onscreen, but in another sense, I don’t ship them at all. 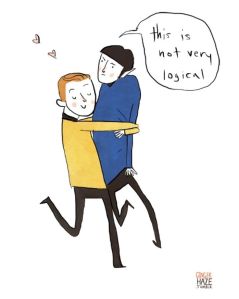 …Except I Totally Ship It

Can we talk about how awesome it would be if Sherlock and John got together in season three?! If there was an “I love you,” or the season ended with a kiss? That would be two awesome male characters together on a mainstream show, one that’s not a “gay show” or a trendy teen drama. Like I mentioned earlier, I don’t know Dean/Castiel that well yet, but from what I’ve seen it would be believable too, and another pair of strong characters. (Shout-out to the Lady Geek Girl and Friends post “It’s totally canon now!” for the info that apparently Dean was supposed to tell Castiel he loves him in season eight, but the line was removed, and also for helping me put the following into words).

Of the three couples I’ve mentioned, Johnlock on Sherlock is the one I can totally get behind right now. As with the other two, but more so: the way their relationship has been portrayed up to now, I can believe its entirely platonic, but if one professed his love for the other, I would completely believe that too. Therein lies the problem. If the relationship is such that we don’t actually know if it’s a romance or not, the shippers will claim it is while everyone else can legitimately claim there are no gay people on TV.

Something might be “practically canon,” but people who don’t ship it have no idea it’s there. The Robert Downey Jr. Sherlock Holmes movies tease that ship so much that in my mind it was “basically canon,” but people who aren’t plugged into the slash shipping scene have no idea, or just ignore it or think it’s a funny joke if they do notice. If we act as if something like that is canon, act like it’s good enough, then creators and networks will assume it is. They can have their cake and eat it too, make the shippers happy and not run the risk of having real, actual gaiety in their shows. 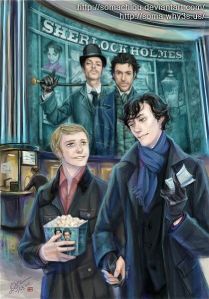 I’m not a huge fan of just “turning characters gay,” and I’m not just asking for more same-sex makeout scenes. I want it to be done well. I want it to be true to the characters, and to be a lovely, positive relationship for those involved, just like I would want for any other characters. But I do want it to happen, with Johnlock or Destiel or some other couple, or ANYONE on ANY Star Trek, for goodness sake. A shiptease, making it look sort of relationshippy and having characters joke about it without actually doing it — that’s not queer representation and it’s not good enough.

What do you think? What are the chances of a ship becoming canon, and are they different for LGBT ships?

9 thoughts on “Shipping LGBT+ Couples on TV: Why I Simultaneously Ship and Do Not Ship K/S, Johnlock, and Destiel”